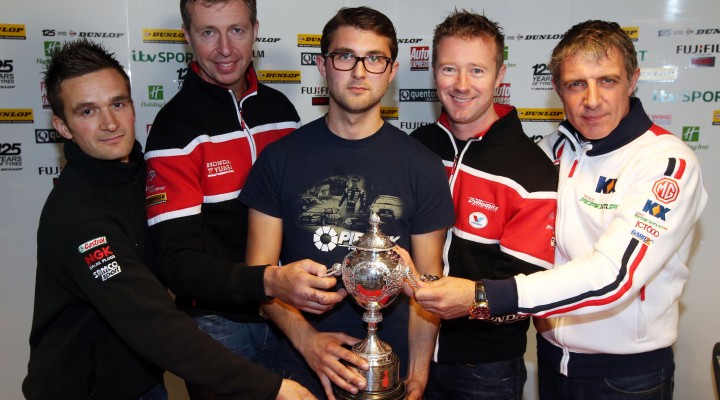 The five remaining contenders for the 2013 Dunlop MSA British Touring Car Championship took part in an official Press Conference at Brands Hatch today ahead of the season finale weekend at the legendary Kent circuit. Here’s some of what our famous five had to say…

It’s not just any other weekend, is it? There’s a championship at end of it. I’ll try and stay as cool as possible and treat tomorrow just as any other practice and qualifying and come up with a plan on Saturday. More often than not the plan goes out of the window in Touring Cars, so we’re very aware that there’s still a long way to go!

We all know the Hondas are good in the dry and wet, so the weather this weekend makes no difference to us.

It’s always special to drive here, I walked the circuit last night and it’s such a fantastic part, walking onto the Grand Prix loop, through Hawthorns and Westfield, they’re real drivers’ corners, and it’s a drivers’ circuit, really old school, lots of undulation and high speed through the trees, so I always like to come here.

I’m looking for a calmer way of staying fit now! (In reference to his martial arts injury) I’ve got to get on with it, I was in two minds to come into this weekend, but we’ve all worked hard this year and anything can happen.

Winning here in 2005 was a very special moment for me, coming through the trees and seeing the crowd as you came off the loop.

We’ve worked particularly hard this year to keep it moving on. Matt said earlier this year that he’d swap luck over talent any day of the week and I know as this season’s gone on that you do need the cards to fall your way.

Having said that, we’ve got three races on Sunday and anything can happen. After Knockhill I was 34 points behind Matt in the championship, and that changed in one weekend at Rockingham, and that can easily happen again this weekend. As far as I’m concerned I don’t really care if I finish second, third, fourth or fifth, I want to win it, so it’s all guns blazing, maximum attack until the end. Five of us have got a great chance, I’m sure it’s going to be spectacular!

Start of the year was very difficult with the new car; we had a very slow start. The base package was very good. I think one of the most important things was the experience WSR had in the engineering department.

It wasn’t until Oulton Park that I was able to unlock some speed from the car and I felt that I had some confidence to start to push it. That was really when the momentum built for me, the strong circuits that rear-wheel-drive cars always appear well at – Oulton Park, Croft, Knockhill – I maximised the performance on those weekends and tried to limit the damage at the other tracks where we weren’t so good. At the beginning of the season if you’d asked me if we’d be fighting for the championship I would hope I could, but realistically? No.

I’ll give it my best shot, perform to the best of my ability and see what happens.
Brands Hatch holds some very special moment for me, I won my first Touring Car race here in 2003 in the MG and I took the title in 2009, but also in 2010, with a wild card World Touring Car race here with WSR and I took podiums on that day, so it’s somewhere I really enjoy racing and somewhere where my track record is quite good, so it always helps the confidence going into the weekend.

I think the way the BTCC is at the moment, if you have a strong qualifying performance and you start on the front row or two, if you can win race one with a little bit of ballast on, then you can win race two. Race three on finals day produces some interesting things that go on, so you never know.

It’s been said – it’s an ace place and it’s a great place to end the championship. The nature of the circuit where there’s this amphitheatre here, hopefully the crowd is going to be in store for some very exciting racing and maybe a championship that won’t be decided until the very last race.

To watch a video of the press conference visit www.youtube.com/watch?v=QdrcJ4EpU8s&feature=c4-overview&list=UUPfVLE1ksDAP9A0Pmo7haHg