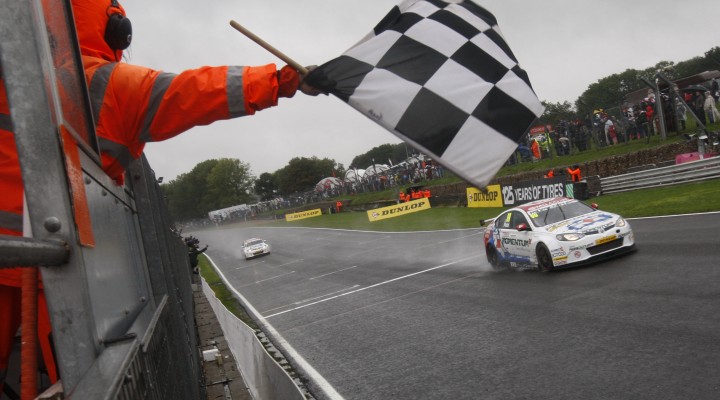 The other title contenders experienced incredible moments during the contest with Gordon Shedden spinning down the order on the first lap, whilst Matt Neal and Andrew Jordan made contact on the exit of Surtees on lap two. Jordan endured his first non-finish of the season due to the incident, whilst Neal’s race went up in flames when his Honda Civic expired on the final lap.

Shedden recovered to finish seventh meaning there are now just three drivers in contention to win the 2013 Dunlop MSA British Touring Car Championship, with Plato trailing Jordan by 15 points and Shedden a further five points adrift. It means Jordan will have to finish eighth or higher in order to be sure of claiming the title, but he’ll have to do so from the back of the grid, whilst Shedden starts on pole with Plato in seventh.

“We’ve got to keep doing the best we can,” said Plato. “Hats off to everyone in the team, we’ve had our ups and downs this year but since the start of Silverstone the car has been really quick. I got the radio call that Jordan was out, and made the team repeat it just to be sure! We’ve had a great start and a great middle to today, let’s see if we can make it a great end! I’ve been here before, Andy hasn’t and he’ll be twitchy. We’re confident, the car feels great while the Hondas look to be struggling. It’s still Andrew’s to lose but let’s see if we can’t nick it!”

The race got off to a breathtaking start when Shedden spun halfway down Paddock Hill on the opening lap and screeched wildly across the track in front of the chasing pack. The Scotsman produced driving of the highest calibre to save the car, as did the drivers of the gaggle of cars behind him who took evasive action.

Plato pulled clear ahead of team-mate Tordoff whilst a titanic tussle kicked off behind. Airwaves Racing’s Mat Jackson and Ciceley Racing’s Adam Morgan went three abreast with Jordan through Surtees on the opening lap but drama struck at the same bend one tour later.

After Jordan had tentatively given best to Jackson and Morgan, he then became embroiled in four-way scrap behind. The Ford Focus of Aron Smith moved down the inside of Rob Collard’s BMW at Surtees and the two cars touched, spinning the eBay Motors machine in the middle of the circuit. Jordan dived left to avoid him, leaving Neal with nowhere to go, and the two Hondas made unfortunate contact. The impact immediately broke Jordan’s left rear wheel while Neal pitted with a puncture.

After the dust had settled Airwaves Racing held second, third and fourth behind the MG duo, but there would be several changes of position before the finish. The Toyota of Dave Newsham made light work of Smith and Onslow-Cole to take fourth, the latter fading dramatically in the closing stages. Smith held on for fifth ahead of the hugely impressive Jack Goff.

The RCIB Insurance Racing driver had previously carved his way through the order during Shedden’s wild opening lap spin and then made eye catching moves on his way to his best ever BTCC finish of sixth. Shedden himself recovered brilliantly to finish seventh although he lost out to Goff despite having passed the Vauxhall Insignia at one stage. After making the manoeuvre Shedden then ran wide at Graham Hill Bend, allowing Goff to nip back by.

Morgan, Onslow-Cole and the Dynojet Toyota of Frank Wrathall rounded out the top ten, whilst Lea Wood won the Jack Sears Trophy.

Neal’s championship challenge ended on the final lap when his Civic caught fire before bursting into flames after the three-time champion had managed to get out of the car.

The climax to this incredible BTCC season commences with round 30 of the championship at 5pm. A series of permutations could see the title going the way of Jordan, Plato or Shedden, so only time will tell who will become 2013 champion.