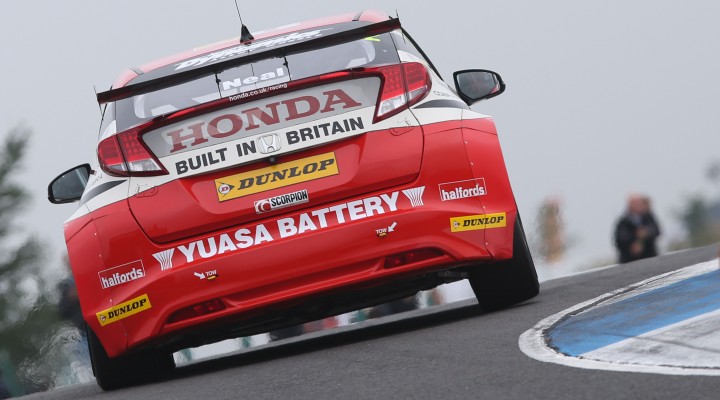 Honda Yuasa Racing may not have retained the Dunlop MSA British Touring Car Championship drivers’ title in 2013 but the squad still secured both the teams’ and manufacturers’ championships for the fourth consecutive season.

Gordon Shedden and Matt Neal were in contention to win the overall crown ahead of the final weekend and both put up an impressive fight under very different circumstances.

Shedden ended his title defence on a high by winning the final race of the season to take second in the standings, whilst Neal finished the campaign in fourth, having had to contest the last two events of the year with a badly broken finger.

In fact, Neal was only cleared fit to race on the Friday before Brands Hatch, but that was not to be the end of his pains over the weekend. A huge qualifying accident, an unfortunate coming together with eventual champion Andrew Jordan in race two, plus a dramatic fire late on in the same contest, put paid to his chances of equaling Andy Rouse’s four BTCC titles this time around.

Shedden himself had to recover from a sensational sideways moment at the first corner of race two. The Scotsman produced a sublime save to get his Honda pointing in the right direction again and he recovered to finish seventh. The 2012 champion had to win the final race and hope that Jordan failed to make the points in order to retain his title – Shedden did his bit with a lights-to-flag victory, but his Pirtek rival duly delivered the required points to take the crown.

The efforts and results from Shedden and Neal did, however, confirm Honda’s superiority as a team and manufacturer, as the squad saw off the challenge from manufacturer rivals MG and the huge number of independent teams to again retain its titles.

“It’s great to win the teams’ and manufacturers’ championships,” said Shedden. “It’s testament to all the guys and a fantastic car. We’ve had a lot of ups and downs this year, but we’ve done everything we could.

“To get within seven points of Jordan was a great effort. It’s the non-finishes that killed it for us, but it’s fantastic for Andy and Pirtek Racing. They’ve worked hard for it.”

Despite the disappointment of missing out on the drivers’ title, the fact the championship was won by another Honda Civic driver wasn’t lost on Neal. “I’m ecstatic for Andy,” he said. “I know what it feels like to win it with your dad and you can’t buy that.

“We’ve still come away with two championships and a second in the drivers’ with Gordon, so it’s not all bad!”

There’s little rest for the champion squad, however, as its build, development and testing programme gets underway imminently. Honda will be looking to retain its BTCC titles while attempting to regain the drivers’ championship in 2014, with exciting news on the team’s plans to follow in the coming months.