The road to victory 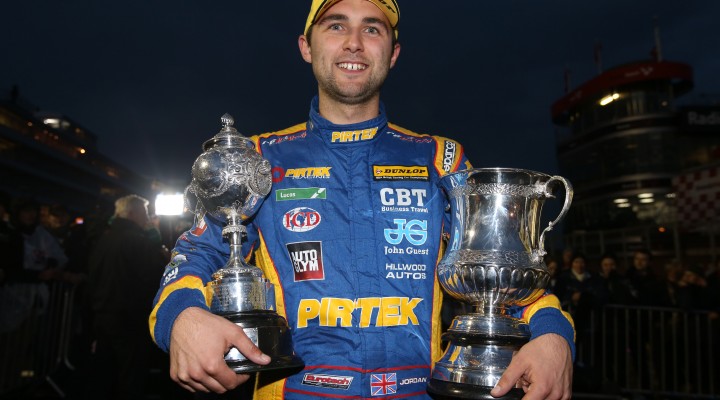 Andrew Jordan and the Pirtek Racing team came into the 2013 Dunlop MSA British Touring Car Championship as reigning Independent Teams’ and Drivers’ champions scoring seven independent wins, with one overall victory and eight other podiums to his name.

Having finished fourth in the overall standings behind the three manufacturer-backed cars of Gordon Shedden, Matt Neal and Jason Plato, the then-23-year-old immediately set his sights on the overall crown for 2013. The return of Colin Turkington made it four former champions on the grid, adding yet another hurdle for Jordan to overcome in the race for BTCC glory.

The family-run Eurotech squad, which this year celebrated its 25th anniversary, threw down a marker at the earliest possible opportunity by setting the fastest time of the day at the only official pre-season test at Donington Park back in March. A few weeks later Jordan backed this up by going fastest in the second free practice session of the year at Brands Hatch before putting the Pirtek Racing Honda Civic on pole for the season’s opening race.

“We’ve got a lot of work still to do, but we’ve started in the right place,” said Jordan after that first qualifying session, and he wasn’t wrong. A scintillating opening contest that saw him go wheel to wheel with double champion Jason Plato set the tone for the rest of the season, although the race almost ended in disaster as Jordan put the pair of them into the gravel on the final corner of the last lap. Amazingly the two recovered with Plato holding on to the win from Jordan, but the marker had been put down – Jordan was going for it.

It took until the second race at Donington Park in front of Jordan’s home crowd for the blue and yellow car to take its first overall win of 2013 – a race in which two of his main rivals, Neal and Plato, were celebrating their 500th and 400th respective BTCC races. After the race, a jubilant Jordan said, “Everyone talks about Plato, Neal and Shedden, but we’re not surprised by our pace and we consider ourselves as championship contenders.” At the end of the meeting Jordan had moved to second in the championship behind Neal – a position he would occupy for the majority of the season.

While most of the other front-runners endured a rollercoaster mid-season, with Plato, Shedden and Turkington all experiencing a mixture of superb wins and podiums with unfortunate non-scores most often due to mechanical issues or on-track incidents. Amidst all the exciting action, both Jordan and Honda Yuasa Racing’s Neal were the two that kept scoring consistently, and took opportunities to maximise their points haul wherever possible.

This meant that coming into the final three events, just six points separated the two drivers – something had to give. With Neal previously having won at the Northamptonshire circuit four times and Jordan having never won at Rockingham, the odds appeared stacked in the favour of the more experienced driver. As is so often the case in the BTCC however, things did not pan out quite as expected.

Disaster struck for Neal in the opening contest, as a rare mistake saw him get off line and spin under safety car conditions, dropping him right down the order to eventually cross the line 14th. Neal’s day went from bad to worse when suspension failure saw him crash out of race two, and while an inspired drive from the back of the field to seventh in race three salvaged him some points, two wins for Jordan meant that for the first time all year there was a clear championship leader.

Silverstone two weeks later and Andrew Jordan once again drove fast and consistently, and while those on the pit wall were urging him to take it easy, race two saw one of the most exciting touring car battles ever witnessed. Jordan and Plato went bumper-to-bumper for lap after thrilling lap, with Jordan refusing to give up on the win despite holding such a strong championship advantage. Although Plato eventually edged ahead, Jordan’s second place ensured he went to the Brands Hatch finale in a commanding position with a 34-point lead.

Jordan did his best to stay cool under the pressure of all four former champions still in with a chance of toppling his title hopes over the final three races. All it would take to lift the trophy were three consistent finishes to add to the incredible unbroken run of 26 points-scoring races for the #77 car. In race one he made it 28 in a row, but in the penultimate race of 2013 things all of a sudden looked as though they might unravel.

Relatively innocuous contact made with the Civic of Neal whilst trying to avoid someone else’s accident broke the rear suspension on Jordan’s car. For the first time in 2013 he did not finish a race, and with Plato winning both of the first two races in the atrocious October rain, Jordan needed to produce a champions drive to come through from the back of the field in race three and clinch the drivers’ title.

Fortunately for Jordan, Plato struggled in the final race, but a lights-to-flag victory for 2012 champ Shedden meant that Jordan had to finish in the points. Driving with the speed and consistency he’d shown all year, the 24-year-old carved his way from the back of the field through to ninth place after 15 laps of the iconic Brands Hatch GP circuit. He’d done enough – the 2013 Dunlop MSA British Touring Car Championship was his.

“It was a key difference coming in saying that we wanted to win the championship,” said the recently crowned champion. “The relief I feel is huge – at 24 to win this championship I’m really really pleased with and I’m glad I could do it with such a great bunch of people.

The Sunday night celebrations stretched on into the night, but the BTCC never stands still, and Pirtek Racing’s preparation for 2014 began today (17 October) with Jordan testing at Donington Park. The Leicester venue plays host to the 2014 Media Day on Tuesday 18 March to kick off what’s sure to be another incredible year of racing action.