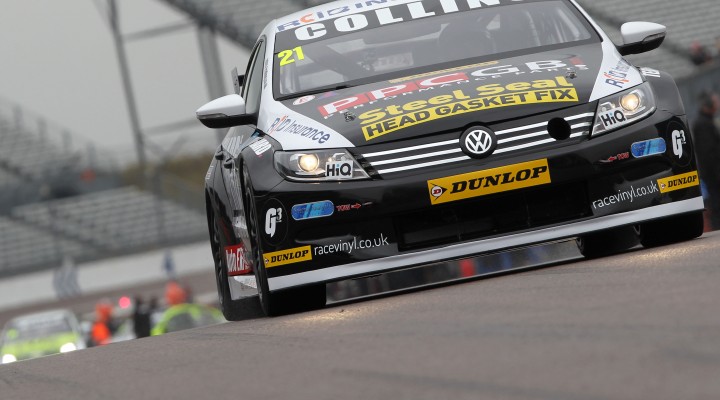 Dave Newsham enjoyed a test with Team HARD earlier this week as the squad took its VW Passats to Croft for a two-day test (5/6 November).

The Inverness-based driver completed one day in the car before handing over to team regular Jack Goff, who himself had a debut run in the Passat. Warren Scott tested during both days in his identical machine under the Team BMR Restart banner.

“It was hard to make a real judgement in terms of speed because we didn’t get any dry running,” said Team HARD boss Tony Gilham. “Tuesday was wet for most of the day and remained greasy even when the rain stopped. Wednesday was similar and the temperatures just prevented the circuit from drying up at any stage.

“It was massively productive though and it was our first proper test as a team. 2013 was the year we built the cars and now we plan to really develop them and get the right drivers on board ahead of 2014.”

Newsham drove a Toyota Avensis for Speedworks Motorsport during the 2013 campaign with a season’s best result of fourth place. He produced his best form towards the end of the year and is already a proven race winner having won two BTCC contests in 2012.

“I’m keeping my options open for next year and am still in negotiations with Speedworks, but when I was invited down to this test it was an opportunity I didn’t want to miss,” said Newsham. “Once I’d got used to the fact the Passat is left hand drive it felt very good – even though it was unfortunately wet which is par for the course at this time of year. The balance of the car was excellent, and I was impressed with the mechanics and the team in general. I feel very sure you’ll be seeing me on the 2014 BTCC grid, but exactly where remains to be seen!”

Gilham was equally pleased to have given Newsham the opportunity to try out one of his machines. “Dave loved driving the car and the test worked for both of us,” he said. “He got to compare another NGTC car and we got to have another extremely experienced driver in one of our cars. We’re talking to Dave about next season but absolutely nothing is decided yet.”

Having started the 2013 campaign without any testing whatsoever the squad is now committed to ensuring the right preparation is put in place ahead of its 2014 assault.

“I’ve always said this is an ambitious project but we had four podiums and took two independent wins in our first proper NGTC season, so it was pretty impressive really,” concluded Gilham. “We’ve added some experienced staff to the team too and it’s all part of our development. We obviously hope to win the championship one day so now we just want to keep improving the cars and make sure we get the right driver line-up, so we can challenge the big teams on a consistent basis next year.

“We hope to be testing at Oulton Park and Brands Hatch in the next month so we’re pushing hard and making sure we’re fully prepared for the new season.”