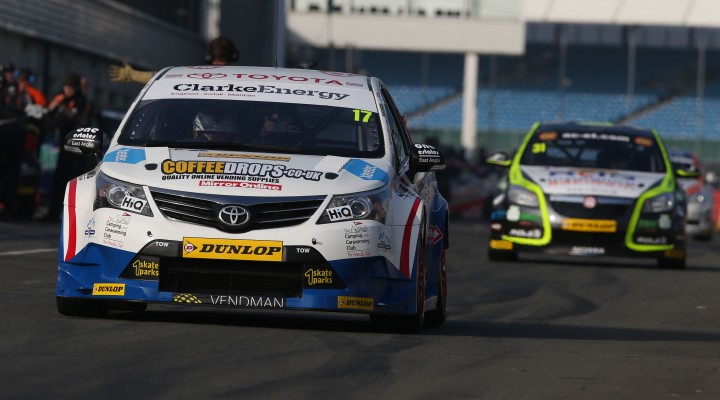 While the Handy Motorsport squad will handle all preparation of the newly liveried black and yellow Avensis for 2014, the team will benefit from continued engineering assistance from the crew at Speedworks which built the NGTC Toyota. Christian Dick’s Cheshire outfit will work hand-in-hand with Handy Motorsport, helping to develop Belcher’s Avensis alongside Speedworks’ own pair of Toyotas.

“Rather than build our own car in the first year, we decided it would be better to work with an existing team”, explained Belcher, “Speedworks was one of the first teams to run the NGTC cars, so have a heap of experience. They started to show what they’re capable of with some fantastic results in the last couple of BTCC events this year, hence the decision to work with Christian’s team.”

Speedworks team principal Dick commented: “I am delighted Simon and Handy Motorsport have chosen Speedworks as their engineering and support partners for the 2014 BTCC season. Simon now has plenty of front wheel drive experience and has proven himself in one of the toughest one-make championships there is.

“That experience will serve him well in the BTCC, as we have seen with previous Clio Cup racers that have made the step-up. Handy Motorsport have always turned out a good looking and well prepared car and, with the continuation of KÄRCHER as title sponsor, 2014 looks to be a very exciting year for all involved in this project.”

Prior to embarking on ‘Project BTCC’ with a move into the Renault UK Clio Cup at the start of 2012, Belcher competed in the Legends Cars Championship alongside close friend Dave Newsham who, of course, went on win the 2010 Renault UK Clio Cup title before becoming a race winner in the BTCC.

Belcher’s graduation follows that of a long line of Clio Cup racers – not least 2013 BTCC Champion Andrew Jordan. The newly confirmed deal for Belcher has been warmly welcomed by key figures from his formative career, including good friend Newsham.

“It is fantastic Simon is joining the BTCC, like me his goal has always been to race in the BTCC so he is realising a dream… and I know that feeling!”, said Newsham, “I competed against Simon in Legends from 2005 to 2008 and then coached his progress through Clio Cup. Simon and Handy Motorsport are an extremely professional team and will make a great addition to the paddock. It will also be good to race with my old mate again too!”

Handy Motorsport plans an initial shakedown of its Toyota Avensis next month before embarking on an extensive pre-season testing programme early in the New Year, both in the UK and Europe. The car will then be officially unveiled for the first time in its striking 2014 livery at the annual Autosport International Show, at Birmingham’s NEC, in January.