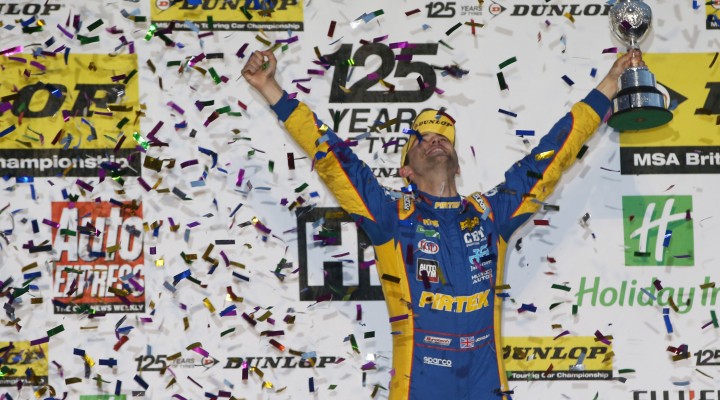 The official review of the epic 2013 Dunlop MSA British Touring Car Championship is now available to purchase on DVD and as a digital download.

Over seven hours of action covers the extraordinary story of this 30 race season, which resulted in Andrew Jordan fending off four former champions to take the title on a thrilling final day of racing at Brands Hatch.

To celebrate the release Duke Video and btcc.net are giving away ten copies of the action-packed review, and have agreed a stunning monthly competition thereafter.

Throughout the off-season we will be giving away ten BTCC DVD’s from each of the last three decades, with each winner getting the chance to choose which year’s review they’d like to receive. We will be starting with the current decade up for grabs in December, while the New Year will see the 2000s DVDs offered. We’ll be ending our latest competition series with a real trip down memory lane as we offer DVD reviews from the Super Touring era of the 1990s.

First up, however, is your chance to win the latest edition from one of the most memorable and successful seasons in the BTCC’s illustrious history. For your chance to win the review of the 2013 Dunlop MSA British Touring Car Championship simply make sure you either like our ‘LATEST COMPETITION’ post on Facebook or retweet our tweet.

Once you’ve done that simply follow @DukeVideo on Twitter and you’ll be in with a chance to win one of ten DVDs.

Remember, every exhilarating moment of this fantastic campaign is covered so don’t miss out!