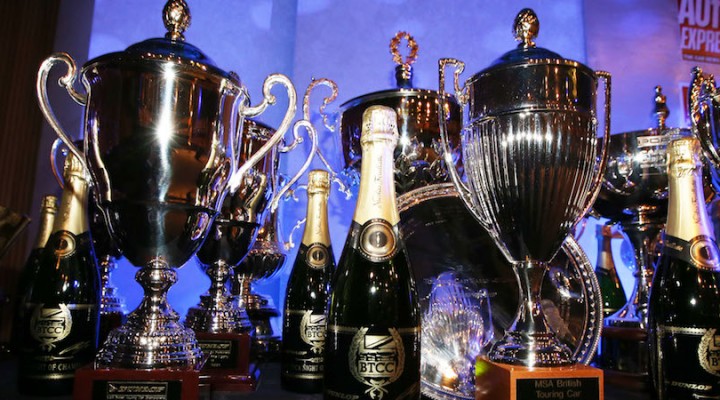 Following a sensational year of action and excitement in the Dunlop MSA British Touring Car Championship, and its supporting series’, the paddock reconvened for the annual TOCA Awards ceremony on Saturday (23 November).

Honouring not just the racing stars but everyone that contributed to the biggest and best motor sport series in the UK, the event once again provided a fitting end to a year of hard work and dedication. Held at the impressive Crowne Plaza Heythrop Park hotel – owned by championship hotel partner IHG – the evening saw race suits and energy drinks swapped for bow ties and champagne.

ITV presenters Steve Rider and Louise Goodman hosted the ceremony as all of 2013’s worthy winners received their silverware at the aptly named ‘Night of Champions’. The BTCC’s supporting cast were first to be presented with their trophies as the champions from Formula Ford, Clio Cup, Porsche Carrera Cup GB and the two Ginetta championships were all hailed in a packed auditorium.

As for the BTCC, Honda Yuasa Racing’s successes in the Teams’ and Manufacturers’ championships were celebrated while Pirtek Racing’s stellar season earned it the Independent Teams’ award.

The inaugural Jack Sears Trophy was awarded to Lea Wood by Sears himself, who is still a huge supporter of the series having been the first ever BTCC champion back in 1958.

The final trophy was awarded to the main man, however, as Andrew Jordan received a standing ovation on his way to collecting the BTCC Drivers’ trophy to add to his Independents’ title, which he’d collected earlier in the evening.

“It was the most surreal day of my life,” said Jordan when reflecting on finals day at Brands Hatch last month. “Going there with four former champions up against me was tough. I was trying to put up a bit of a front and say it wasn’t bothering me but I was pretty tense.

“You couldn’t have made up what happened to us in race two, but looking back it was a fantastic way to win it and it was great for the series to have a finale like that in front of the fans at the circuit and those watching on television.

“I went into the season very confident but this is the toughest championship around, so I was going to need a bit of luck along the way and a great team behind me. We’ve had 100% reliability for the last two seasons and everyone in the team did an unbelievable job. My dad has been a great mentor and I really have to thank him – I can’t wait to work with him and the rest of the guys again next year and try to do it all again!”

It was an enjoyable and well-deserved evening for the TOCA community as dinner and dance followed the glittering trophy proceedings. For now the celebrations are over, however, as the hard work has already begun in preparation for the 2014 BTCC season!