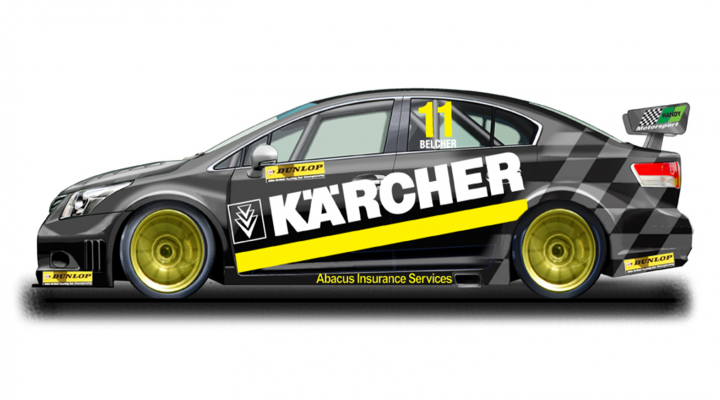 Dunlop MSA British Touring Car Championship newcomer Simon Belcher, who will make his race debut in the UK’s biggest motor racing category next year, made his first track appearance at the wheel of his newly acquired Toyota Avensis at Silverstone on Wednesday 4 December.

Just a fortnight since announcing his graduation from the BTCC-supporting Renault UK Clio Cup, the Swindon racer thoroughly enjoyed his eagerly awaited first run in the Speedworks Motorsport built 2 litre Toyota and reported a very encouraging day at the Northamptonshire venue.

Although an issue with the car during the damp opening session hampered the KÄRCHER-supported driver’s early laps, the three subsequent sessions were dry and afforded the 2012 and 2013 Renault UK Clio Cup ‘Masters Cup’ title winner a good opportunity to adapt to the Toyota.

“It’s been a brilliant day, it was everything I expected”, said Belcher, “I’d never even sat in a touring car before today and we weren’t a million miles away by the end, so I’m really pleased. We made some good progress and I really enjoyed working with the Speedworks guys for the first time.

“I wondered how the speed of the car would feel and compare to the Clio I’ve been racing the past two years, and the touring car does have so much more power. What needed getting used to the most, though, was the brakes – you really have to stand on them.”

Belcher added: “When you’re strapped into the car it doesn’t feel that much bigger, but the steering is harder work and everything is just that bit heavier. The more aggressive you drive a touring car, the smoother it feels, so you really have to grab it by the throat to get the most out of it. That’s different to what I’ve been used to with the Clio and something to work on over the winter.”

With the initial shakedown of his Toyota now complete, the next appearance of the car – which will run under the ‘Handy Motorsport’ banner in the BTCC – is scheduled to be at Birmingham’s NEC in January where the 2014 livery will be unveiled during the annual Autosport International Show. The event runs over four days, between Thursday, 9 January, and Sunday, 12 January.

Following a programme of winter testing during the early part of 2014, Belcher’s first ‘official’ BTCC appearance will come during the pre-season Media Day at Donington Park in the East Midlands on Tuesday, 18th March.

The championship itself will get underway less than two weeks later, on 29/30 March, at Brands Hatch Indy Circuit in Kent and will travel the length and breadth of the country before reaching its conclusion back at Brands Hatch, on the longer Grand Prix Circuit, on 11/12 October.