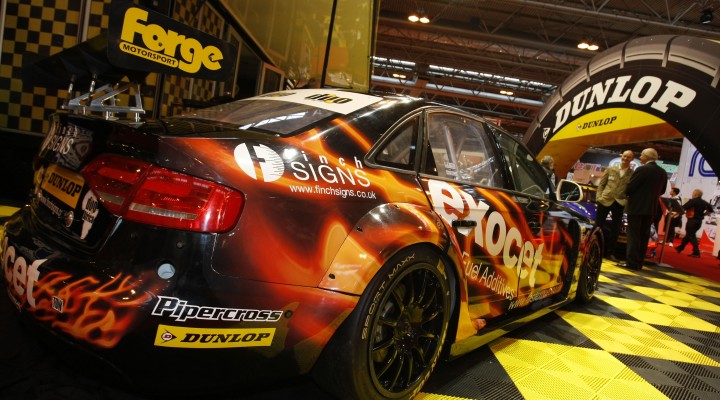 Rob Austin Racing unveiled its NGTC Audi A4 that will contest the 2014 Dunlop MSA British Touring Car Championship today at the Autosport International show. Now with title sponsorship from Fast Exocet, the team is planning to build on the good results achieved at a number of rounds in 2013, which included a breakthrough first win at Rockingham in September.

Austin himself is in eager anticipation of the challenges 2014 will bring, and said, “These are massively exciting times for our team. Fast Exocet’s input is going to play a vital role in our results in 2014, and I know our brilliant fans will get right behind them as we seek to challenge for podiums and race wins.”

Fast Exocet, which provided sponsorship for the team in 2013 enabling promising youngster Jake Hill to contest the final event of the season, will have full branding on one of the team’s two entries and will also appear on the second. Managing Director of the company Neil Ryding adds, “Following a successful first season in 2013 as subsidiary sponsors of Rob Austin Racing, we are very pleased to announce that our association will continue over at least the next two seasons.

“Fast Exocet sees its presence within the BTCC as an integral part of its growth plans and on-going efforts to increase the Exocet brand recognition within the automotive and retail sectors.”

The newly liveried car will be on the Dunlop BTCC display stand at Autosport International at the Birmingham NEC all weekend, and information regarding the show can be found here.