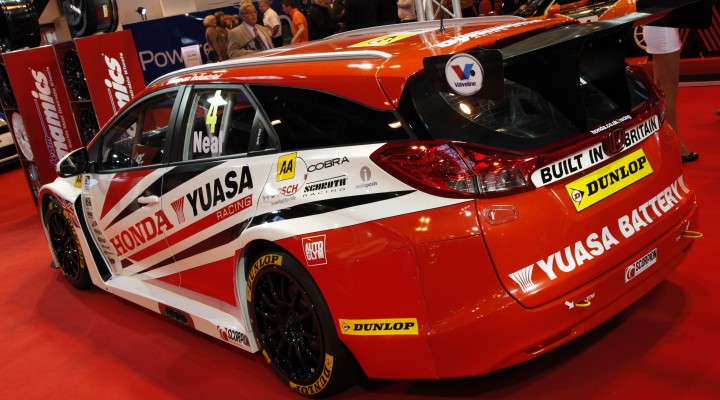 Multiple-champion squad Honda Yuasa Racing enter the 2014 Dunlop MSA British Touring Car Championship with a brand new car – the Honda Civic Tourer, and both drivers Matt Neal and Gordon Shedden are looking to take on the challenge and make a bid for the title.

Looking back at 2013, both were in close contention for the BTCC crown until the final round, with Shedden coming to within seven points of eventual champion Andrew Jordan. Reflecting on what was a year of mixed results for the 2012 champion, Shedden said, “I had too many non-finishes early on in the season. It’s impossible to win this championship with five DNFs – it’s just far too competitive – but I didn’t give up, I fought right to the very end and won the last race of the season and made Andrew work for it.”

Triple-champion Neal had a stellar start to 2013 that left him in close contention to win a record-equalling fourth title before a tough weekend at Rockingham and an injury to his hand put things just out of reach. Despite this, Neal has now turned his attentions firmly to 2014 and the challenge of the new car.

“I’m not going to cry about last year,” said Neal. “I’m just really looking forward to this one! The first car is the one we’ve got here on the stand at the Autosport Show, and weather permitting we’ll be out in two weeks to get our first feel of what it’s all about. It’s been 20 years since the Volvo estates were racing which is quite a milestone, and I think it looks great!”

Likewise Shedden is glad to be making a statement in the BTCC and said, “We wanted to keep things fresh – it just shows that we’re not afraid to push the boundaries, to come up with something new, something different and it looks fantastic! We’ve certainly not stood still over the winter, it’s a different challenge, but we’re up for it – hopefully it’ll give both Matt and I the chance to fight for the championship.”

Neal is hopeful that the Tourer will set Honda Yuasa Racing apart from the rest of the field and generate a following in its own right. He concluded, “There’s a few things which will be better about it and a few things that are more of a compromise, but I hope we’ll be there or thereabouts. I was the one who suggested the move back in June of last year, trying to introduce something that’s quirky and different for people to get behind that still has a chance at the title.

“There are so many cars on the grid – plus the last three cars Dynamics has built have won in their first weekend, so we’ve got a bit of a challenge for this one, but I’m just excited about it, so bring it on!”