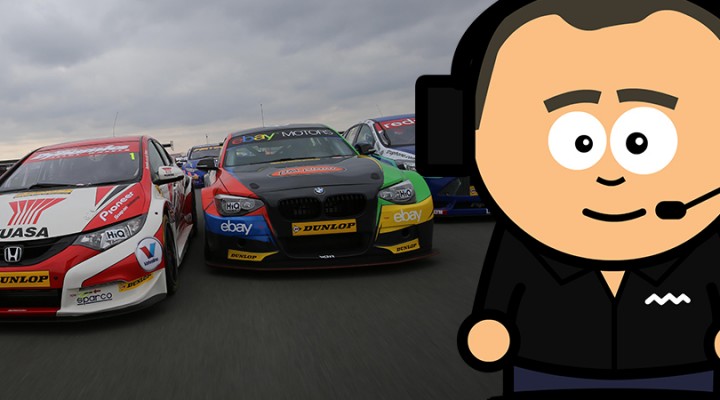 Friday being a day of work, it was necessary last week to dash home from the Ring O’ Bells pub, Daresbury, and a fine pint of Doom ale, in order to answer questions from BTCC fans on Twitter in #AskAdders, a new idea hatched at Autosport International.

And, no surprises, there were some very good questions, touching on favourite cars in the BTCC (answer: Alfa Romeo. Again, no surprises…) to whether a pit stop race would be a good thing. The joy of Twitter being 140 characters means answers were brief by necessity, so let’s pick out a few questions here and look in a bit more detail.

Let’s start with the pit stop race idea. There is a part of me that likes it because it would give the races something different, but if it were to be introduced I would advocate just one race a year – any more and it loses the novelty. But… before we run away with the pit stop race idea, bear in mind that the current three-race format works well for ITV and chopping a timetable around to include a longer race with the confusion of pit stops may not be desirable to a broadcaster. Second, think about the size of the entry and the size of some pit lanes. You’d never be able to do it at Knockhill or Oulton Park, I suppose, so Silverstone would be the most likely place. In short, it isn’t as easy to implement as one may think.

Another good question was: “Who are the drivers to watch this year?” Well, the obvious Fab Five from last year will be up there but I threw in Adam Morgan, United Autosports and Airwaves Racing. But I also held one name back…

Marc Hynes. I suspect that a number of BTCC fans are asking “Who?” in context of the 1999 British F3 Champion. As btcc.net has covered recently he was the man who beat Luciano Burti and Jenson Button to the crown, and survived being squeezed towards the pit wall by Burti at the start of the championship showdown. But Hynes never quite clicked in the way that some of his contemporaries did. Maybe it was the cavalier attitude to his racing, his lack of budget perhaps. Either way, there was never any lack of talent.

There was a brief foray into F3000, a dabble with sports cars and a season in the cut-throat world of the Porsche Supercup, before he made his touring car debut in 2008. He did so at Philip Island in Australia where he partnered Fabrizio Giovanardi in the second TeamVodafone Ford Falcon. Run by… Triple Eight.

The Philip Island weekend was really just a build up to Bathurst where Hynes and Giovanardi raced in October that year, a week after Gio had clinched the BTCC crown. The weekend was tough: they finished 15th out of 20 finishers and needed to learn the circuit and the quirky cars at the same time. Hynes had a bird smash his windscreen in Friday practice and despite his lack of touring car knowledge was only two-tenths shy of Giovanardi on best race laps. Two tenths shy of a man, regarded by some, as a star. Is all that evidence to get excited about his arrival into the BTCC?

In isolation, no. But factor in his ability and his personality, I reckon he’ll be a big hit in the BTCC. It may take a few weekends before the win comes but I’m convinced that he will win races and he is the irreverent maverick the series wants: he’s great for a quote out of the car and can deliver behind the wheel. Welcome aboard…

After four days at the People’s Republic of the NEC and myriad announcements, an entry list is starting to take shape. And there is a lot to look forward to, such as the new Honda Civic Tourer of Honda Yuasa Racing (I have Gordon Shedden’s strident assertion of “It’s a tourer not an estate” ringing in my ears), Robb Holland bringing the Audi S3 to the grid and the Mercedes of Adam Morgan all adding new shapes. There are new drivers, Hynes and Glynn Geddie at United Autosports certainly two to watch, and new teams as well.

United Autosports, or UA for the purposes of brevity from now on, is one of them. The team has a plethora of talented people and will most certainly look the part; James Cole has a point to prove after last year and isn’t short on ability, and Glynn Geddie knows how to win in GT cars so the components are there for a successful season. But the flip side is that UA hasn’t breezed to success in GT races, despite all its many plus points. Winning in the BTCC isn’t easy either so don’t expect success straight away, but it will be fascinating to see how the team adapts.

More good news from the NEC was Rob Austin’s new sponsorship deal and his share-selling initiative has been a big hit, Simon Belcher’s Toyota looked good and with realistic ambitions for the season he will be part of the midfield pack and Ollie Jackson’s switch to a Welch Motorsport Proton should help that package develop with data from two cars. Martin Depper returns to the BTCC after a season of winning races in the Volkswagen Racing Cup and he will be eager to show what he is capable of after his frustrations in the Forster Motorsport BMW of a few seasons ago, while Chris Stockton plans to be back and should ignite some of the battles.

So far, then, it is a strong entry for sure and once we know the full list, a few predictions can be made. Undoubtedly, though, we are in for a belting season – March still seems a long way off, doesn’t it?