PRODUCTIVE FIRST TEST OF 2014 FOR BELCHER 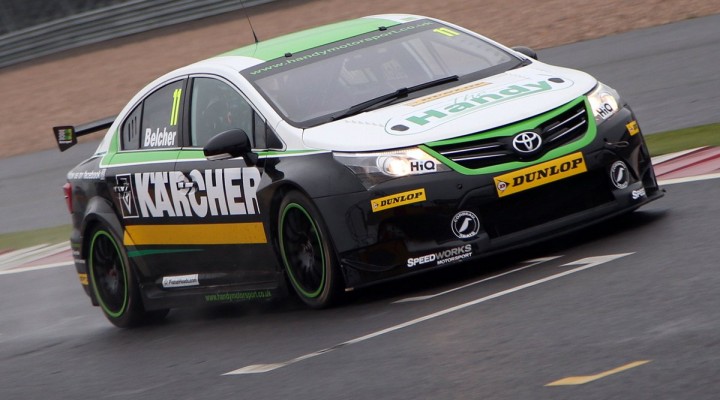 Simon Belcher enjoyed a highly productive first test run of 2014 at a wet and blustery Silverstone National Circuit on Friday (14 February), as preparations for his maiden season in the Dunlop MSA British Touring Car Championship begin to gather momentum.

Appearing on track for the first time since officially unveiling his KÄRCHER-liveried Toyota Avensis at the Autosport International Show in early January, the Swindon driver worked on a variety of set-up changes throughout the day.

Although Belcher wasn’t able to get the benefit of some desired dry running at the wheel of his Speedworks-built Handy Motorsport machine, he was still able to complete around 200 kilometres.

“It was a full day of wet testing and it went well, we made some good progress,” said the Wiltshire driver. “The changes we applied to the car made it better and better, even though the conditions were getting worse the times weren’t dropping off. We just need some dry testing now!

“We did another 200 kilometres in the car and it was good to be back working with the Speedworks guys again. We were also able to share data with Tom Ingram who was out testing for the first time – with two people out there trying different things it means you can push forward at twice the speed.”

Belcher’s next pre-season test will come at Cheshire’s Oulton Park in early March before additional visits to Brands Hatch and Donington Park – the latter, of course, set to host the BTCC Season Launch and officially timed test on 18th March.

“It’ll be all systems go the next time we’re out at the start of March, everything ramps-up then as we get towards the first round,” added the double Renault UK Clio Cup ‘Masters Cup’ Champion. “Both runs we’ve had at Silverstone so far have been positive, getting plenty of mileage in at Oulton Park, Brands and Donington is going to be really important before the start of the season.”