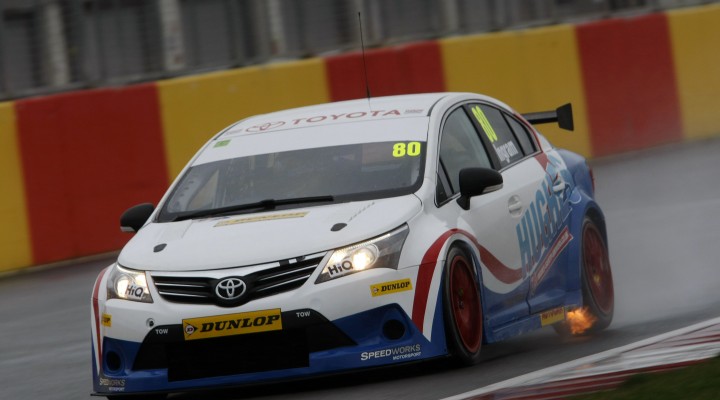 The BTCC’s latest rookie, Tom Ingram, completed his first test in the Speedworks Toyota Avensis last week and the young gun made a real impression at Silverstone.

The High Wycombe driver was back at the same venue where he secured the Ginetta GT Supercup title last season, but this was a very different scene as Ingram made his NGTC debut on a wet, windy and ultimately cold day in Northamptonshire.

“It was fantastic to get my first test in an NGTC touring car under my belt,” he said. “As you can probably imagine, I was rather excited about it beforehand – and it was key for me to get off to a positive start with both the car and the team.

“I had already spent a couple of days up with the team, getting to know all the Speedworks guys and gaining a general understanding of the car and how it works. That was extremely productive and I felt comfortable in the Avensis very quickly – I was impressed with it straightaway.

“I know people have said in the past that the NGTC cars are difficult to drive, and obviously coming from a rear wheel-drive background, I fully expected it to be a tough transition, but to be honest, the hardest thing for me to adapt to was the turbo delivery. With the track being wet, all-of-a-sudden I would find myself wheel-spinning out of the corners, which wasn’t something I had previously been used to.

“We suffered a few niggling problems with some electrical gremlins, but nothing that can’t be fixed, and overall, I came away from the test feeling really pleased. We got a lot of good running in despite the conditions, and we left with some ideas regarding different things we can try out set-up wise. To be honest, right now, I just can’t wait to get back out on-track in the Avensis again – although hopefully in better weather next time!”

Team boss Christian Dick was delighted with his squad’s first run of 2014 and particularly the maturity shown behind the wheel by his new recruit.

“The whole team was really impressed with Tom’s approach to his first test in our NGTC Toyota,” beamed Christian. “He spent a lot of time preparing for it – and that clearly showed! In what can only be described as terrible conditions to get your first feel for the notoriously tricky-to-drive NGTC machinery, Tom excelled. He was very relaxed and professional, and never put a foot wrong. By mid-afternoon, we were making changes based on his feedback and I think we’ll have a fantastic season together.”