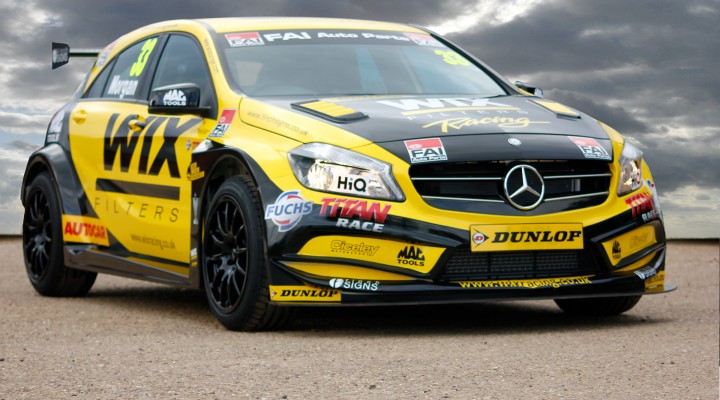 The livery for the hugely anticipated WIX Racing Mercedes-Benz A-Class has broken cover this evening (25 February) ahead of the car’s maiden campaign in the Dunlop MSA British Touring Car Championship.

Adam Morgan, who scored his first BTCC podium at Oulton Park last season, will pilot the distinctive yellow and black machine for 2014 with the same family-run Ciceley Motorsport squad behind him.

It will be the first time a Mercedes-Benz has been seen on the BTCC grid since the late 1980s, and the addition of the A-class makes it an expected 14 models of NGTC car that will line-up to do battle for the first time at Brands Hatch on 30 March. Ciceley Racing, which ran Morgan in a Toyota Avensis in 2013, announced the switch to a brand new car back in September, and the Preston-based outfit has been hard at work to get the car prepared ever since.

The squad later confirmed a partnership with WIX Filters and will run under the hugely popular WIX Racing banner this season, which obviously includes the familiar colour scheme as seen on the replica show car this evening. Morgan’s NGTC race car is close to completion and is expected to begin its test programme in the next week.

Russell Morgan, team manager for Ciceley Motorsport, said: “I am extremely pleased with the look of the show car and the overall partnerships we are enjoying this year with WIX and all the supporting partnerships. I am looking forward to having the race car design implemented ready for the first round at the end of March.

“The commercial value of a title sponsor can never be underestimated. The WIX Racing team has already demonstrated what it is able to achieve in the BTCC, with regards to working with the driver and the team to raise both profiles. They are passionate about interacting with all of the team and especially the fans with giveaways and competitions, so there’s a lot to come on race weekends.

“Their technical expertise is just as important to the team as their financial assistance and this has clearly been reflected in the design of the car.”

WIX Filters Managing Director, Wayne Stevens, is also looking forward to another year of success in the BTCC: “All here at WIX are delighted with the look of the new WIX Racing Mercedes and we are very excited about the season. This year is set to be the most competitive and exciting season ever, with a full grid and so many champions.

“Being involved with the BTCC as a title sponsor has been fantastic for WIX – it has really supported and elevated the positioning of our brand across many segments of the market and also to the general public and avid fans of the sport. In my opinion, it’s clear to me that it’s the most exciting and engaging motorsport platform to be involved in, with the most passionate of fans of all ages. It truly makes for a great weekend and also a fantastic live TV spectacle. We hope to be involved for a while and work in close partnership with Ciceley Motorsport and our supporting sponsors longer term, especially with the new exciting Mercedes A-Class.”

You can see a video of the car being wrapped on the BTCC YouTube Channel here:

VIP Access ALL areas with WIX Racing at a BTCC Race Weekend…..Interested? We are looking for one budding documentary / video producer, who would like the opportunity to shine with their work and spend a weekend with the team as our guest and official videography for the selected Race. You will have access to the team, Adam Morgan and the car during the weekend, so a great opportunity for you to use your skills and visualise a weekend in the life of WIX Racing from behind the scenes for everyone! You will also get a Team WIX Sweat top as part of the prize, so you will really blend in with the team!