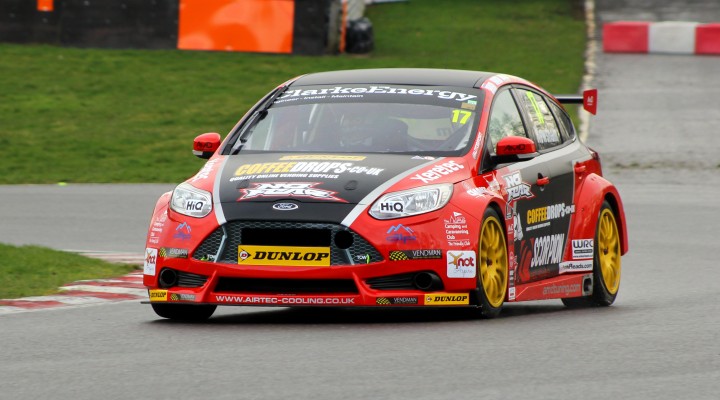 The Inverness-based racer endured a challenging campaign in 2013 with flashes of speed in the Speedworks Toyota Avensis bringing mixed results. This followed Newsham’s breakthrough season where he scored two victories in 2012.

Now settling into his new home with the Essex squad AmD, Newsham completed a solid run today, which followed a shakedown of the car at the same venue two weeks ago.

“One of the big struggles in pre-season will be finding days with some decent weather, so we bedded in the car in order to allow David to jump straight in and go testing,” said Team Manager Shaun Hollamby, who carried out the initial run.

The team ran a S2000 VW Golf in the Jack Sears Trophy last year, but plans were already afoot for the squad’s NGTC graduation. Hollamby eventually purchased a fully-built Focus from Motorbase and admits it was a benefit to see them getting the car’s first full season under its belt.

“It was great for us at the end of last season to grab a S2000 win, which was a nice sign off for my own BTCC racing career, but now we just can’t wait to get started with David behind the wheel,” continued Hollamby. “It was in the back of my mind at the start of 2013 to ask David Bartrum [Motorbase Team Principal] about selling us a Ford Focus. I watched their progress throughout the year and they turned it around at the end of the season and proved the pace of the car.

“It was an easy decision to go with the Focus in the end. We’ve got a car and a driver that are proven race winners – now it’s down to us to prepare the car in a way that will bring success.”

Hollamby knows, however, that success won’t come easy as the 2014 Dunlop MSA British Touring Car Championship looks set to be one of the most competitive season’s in the series’ illustrious history.

“It’s got to say it’s the best motor racing grid of any series,” he concluded. “The depth of talent is a huge – even scoring a point is going to be a challenge for anyone. I think 25 drivers will believe they can win races, including us if we get everything right. It’s incredible to have the champions and names involved in the series, plus of course the young drivers coming through. We can’t all win of course, but if it was easy then everyone would be doing it.”