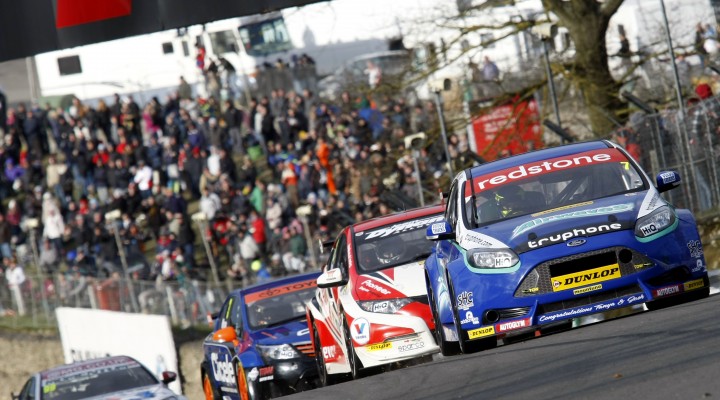 The 2014 Dunlop MSA British Touring Car Championship season gets underway at Brands Hatch this month (29/30 March), with an unprecedented seven former champions on the grid set to make this a year to remember!

The return of BTCC legends Alain Menu and Fabrizio Giovanardi, both double champions, has heightened anticipation to fever pitch, and Brands Hatch is certain to be buzzing with excitement this spring. Crowds are expected to boom for Britain’s biggest car racing series in 2014.

“This is exciting, confirmed Menu, who has signed to drive a VW Passat for Team BMR after several years racing in the World Touring Car Championship. “The best times of my career have been in the BTCC, and it’s going to be nice to see many people I’ve not seen for many years. I’m well aware that it will be different with a new team and new cars, but I’ve been watching the races, have spoken to a lot of people about it and the championship is really picking up at the moment. With lots of competitors, spectators and live TV, there are many reasons to be here.”

Giovanardi will race a Ford Focus for Wrotham’s Airwaves Racing: “I’m really looking forward to starting again, to go bumper to bumper with the other guys!” he quipped. “It’s always different, always tough. To win a championship makes a difference – you are a hero but it’s a new season, a new car, new guys. I have to try to stay in front of everyone, it doesn’t matter who it is!”

The pair will face BTCC regulars Matt Neal, Jason Plato, Gordon Shedden, Colin Turkington and reigning champion Andrew Jordan for the first time at the Kent circuit, where Jordan secured his first title last October. “It was tense last time we were here but I’m looking forward to it,” said Jordan. “And we’re excited. It’s been a busy winter – I had a week’s holiday after and then it was straight back to it really, so I’m hungry to do it again. I’ve been doing lots of training, trying to improve myself for this year. It looks to be very competitive this year, that’s why I’ve been working hard to make sure we’ve done all we can.

“It’s going to be competitive, but it doesn’t really make a difference to our approach. The number of champions doesn’t make a difference to us – we want to win and beat whoever is there. The championship’s got a real buzz about it and I’m really proud to be part of it. I’m equally as obsessed with winning it as I was at the start of last year, so my approach won’t change, it will be to win races, be consistent and see where that puts us towards the end.”

Whilst Jordan will be racing the proven Civic, the works Honda team are switching to the Tourer model, the first estate car in the BTCC since the Volvo 850 twenty years ago. Triple champion Matt Neal has been working hard with team mate, 2012 champion Gordon Shedden, over the winter to ready his new challenger: “It’s very different,” Neal says. “It’s still early days yet with the Tourer, we thought it would be similar with the same wheelbase, and we have a different engine this year to work with. Team Dynamics’ previous three cars; the Integra, the older S2000 Civic and the NGTC Civic have all won on the first race weekends of the season, so it’s definitely going to be a challenge.”

Meanwhile both double champion Jason Plato and 2009 title winner Colin Turkington are hot favourites for honours this year after impressing last year. Turkington returned after a sabbatical from the BTCC with a new car, the BMW 1-Series: “Last season was a real transitional period for me, but hopefully it’s made me a better driver and I am confident I can go even better with the eBay Motors team this season.”

Tickets for the Dunlop MSA British Touring Car Championship at Brands Hatch are available from £26, with free entry for children aged 12 and under. For more information call 0843 453 9000 or visit www.brandshatch.co.uk