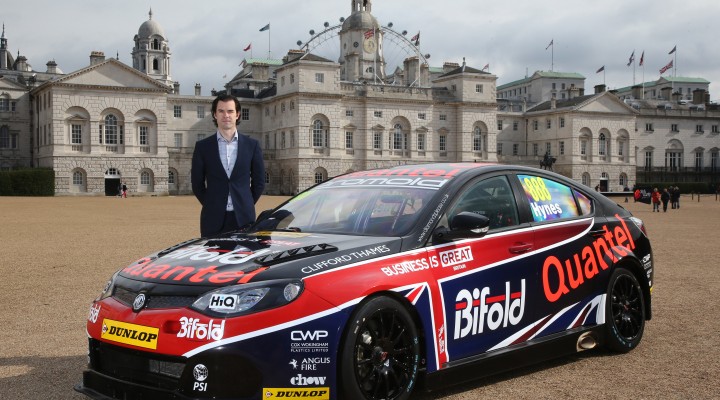 The Triple Eight Engineering-run MG6, which will be driven by former British Formula 3 champion Marc Hynes in this season’s Dunlop MSA British Touring Car Championship, was basked in glorious sunshine as invited guests and passers-by looked on. After the obligatory photo shoot attendees were then invited inside the Household Cavalry Museum where a number of key and impressive enterprises were announced.

LDC (Lloyds Development Capital) portfolio companies Bifold Group and Quantel were confirmed as the headline sponsors, whilst a partnership between DFT Limited and the Department for Business, Innovation and Skills (BIS) were also revealed.

Conrad Bird, Director of the GREAT Britain Campaign in the Prime Minister’s Office, was there to lend his support and outline an affiliation that he believes will help celebrate the UK’s automotive and motorsport heritage and raise awareness of the ‘Business is GREAT’ campaign.

Hynes also took centre stage, as did Darryl Eales, CEO of LDC and one of the key players behind Quantel Bifold Racing.

“The British Touring Car Championship is an integral part of the nation’s motorsport heritage,” Eales said. “The launch of the Quantel Bifold Racing Team and partnership with the ‘Business is GREAT’ campaign is the perfect platform to demonstrate the nation’s engineering prowess and reiterate how important the manufacturing industry is in leading the recovery and growth in the UK.

“Bifold and Quantel are the ideal partners for the project and provide a great example of British engineering and technology businesses that have achieved impressive growth in recent years after investing in product innovation and expanding into international markets. By partnering with the ‘Business is GREAT’ campaign, we aim to instil confidence in businesses from across the industrials and technology sectors and show that with the right investment and support, potential is limitless.”

An exclusive interview with Hynes will be published on btcc.net next week as he continues preparations ahead of his maiden season in Britain’s premier motor sport series.