BTCC champions all in testing action 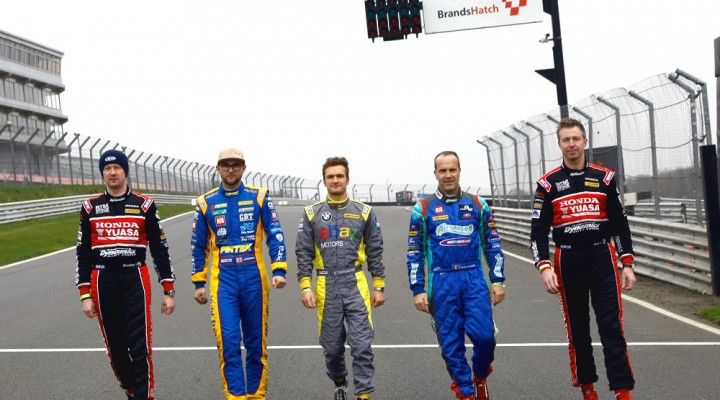 Five BTCC Champions took part in a vital group test at Brands Hatch today (11 March), whilst the other two who’ll be contesting the 2014 campaign were also in action at other circuits.

The Brands Hatch test provided the first chance for many teams and drivers to compare their form ahead of the new season, and in particular to benchmark themselves against reigning supremo Andrew Jordan, who has looked supremely quick in a number of pre-season tests.

“I don’t know where the others are, but I know what we’re doing!” said Jordan. Looking forward to the first round he said: “Pole position and wins would be ideal but it’s a long season, so we need to be consistent and quick, which is our plan.”

Honda Yuasa Racing were also present, running the new Civic Tourer model. Triple champion Matt Neal spent much of the day setting up the car for the unique challenges of Brands Hatch. “It’s been a really positive day and it’s nice to have a little bit of a benchmark,” he remarked. “The others aren’t going to make you go faster, and they’re not going to give you their data to compare, but it’s nice to see where you’re at and if you’re in the hunt. I think round one is going to be busy, just out qualifying with 31 cars on the Indy circuit. You’re going to have to be really pulling your socks up to get into the top ten, there’s no margin for error.”

Team-mate Gordon Shedden, 2012 champion, added: “The most important thing is that together we’ve got the best package to try and hone going forwards. We’re trying to get as much out of it as possible, but it is a very different animal to the hatchback. I think I had a fairly turbulent year last year, but now we’re all back level again, and we can go at it hammer and tongs again!”

2009 champion Colin Turkington was also present and is ready to launch a title assault with the eBay Motors BMW 125i M Sport. “The level of competition this year is extremely high,” he said. “But it’s never easy in this championship, it’s never an easy year, so we just have to focus on our own car, and give the best performance each time. It’ll be good to win a race at the opening round, I have that surely in the forefront of my mind.”

Meanwhile double champion Fabrizio Giovanardi returns to the championship with Wrotham’s Airwaves Racing. Getting to grips with the team’s Ford Focus he said: “The feeling is getting better as I start to understand the car. When you restart a new championship with a different car after four years it’s difficult, but step-by-step I think we’ll be ready. There is always competition, you need other cars just to compare yourself, or you don’t know where you are. I can tell you that we have to work, but I’m not scared. It’s difficult to say who is fast, Jordan has to be because he is he champ, and Matt Neal obviously because I know him.”

In addition to the BTCC cars, machinery from the supporting Ginetta GT Supercup and Renault UK Clio Cup were also on track. They will be joined by the Porsche Carrera Cup UK, Ginetta Juniors and Formula Ford UK on 29/30 March, and raceday will also feature a free pitlane walkabout and autograph session.

Elsewhere MG continued its planned programme at Oulton Park where Jason Plato commenced his second pre-season test, whilst Team BMR’s Alain Menu has been busy acquainting himself with the VW Passat during a three-day test at Croft.

Tickets for the opening round of the Dunlop MSA British Touring Car Championship at Brands Hatch are available from £26, with free entry for children aged 12 and under. For more information call 0843 453 9000 or visit www.brandshatch.co.uk