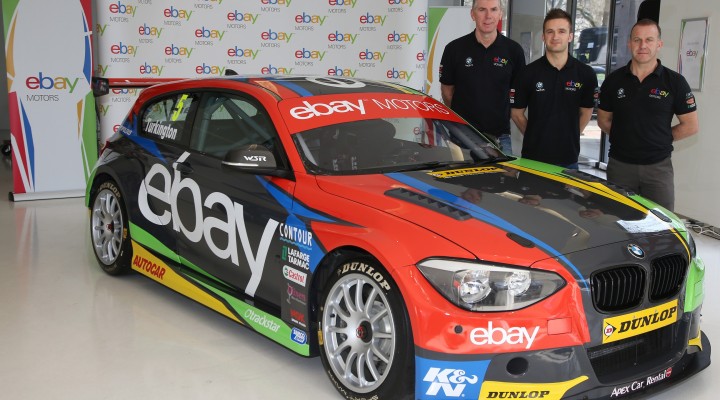 The new-look car has evolved from last year’s BMW 125i M Sport. WSR’s focus in the off season has been on refining the aerodynamics to improve downforce and reduce drag. They have also been working on the mandatory geometry of the NGTC specification car. The team’s engine supplier, Nigel Brown Engineering, has developed the engine to increase the horsepower and torque.

This year marks the fifth season in the BTCC for eBay Motors, the UK’s leading online automotive marketplace with over 18 million visitors a month and 200,000 cars and motorcycles for sale, and it looks set to be the most exciting yet. The partnership with WSR reflects the shared passion for cars and motorsport enabling eBay Motors to connect and engage with automotive fans of the BTCC.

Colin Turkington said: “I feel really confident going into the season with eBay Motors, the guys have worked tirelessly over the off season to improve the car for the new season. We have made a number of tweaks that will make us competitive from the start. I think the new design looks great and will set the car apart from the others on the grid. I can’t wait for the opening race of the season at Brands Hatch.”

Dick Bennetts, eBay Motors Team (WSR) Team Principal, added: “I have a great feeling about the upcoming season. We were impressed with the car last season and feel that with a season with the BMW 125i M Sport under our belt we can be competitive from the first race. We are immensely grateful of the support from eBay Motors and BMW, who buy into our vision and potential of this team.”

Tony Austin, Manager of eBay Motors, said: “With the 2014 BTCC season just around the corner, we are delighted be able to unveil the fantastic new livery of the eBay Motors BMW 125i. eBay Motors has continued to go from strength-to-strength and the BTCC sponsorship gives us a great opportunity to connect with fans through our shared passion for motoring – we wish our drivers and all the team the very best for the season ahead.”