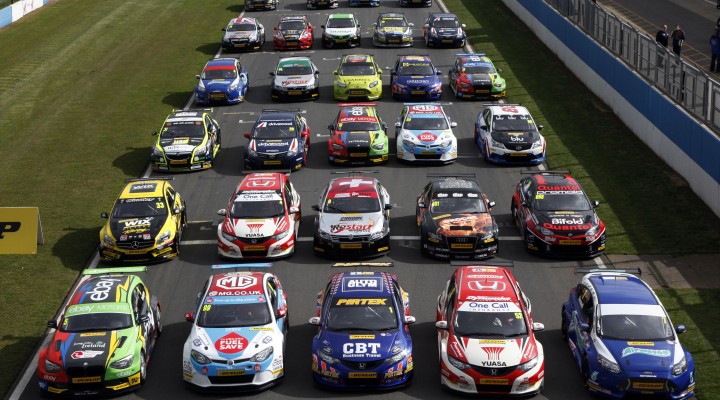 The Dunlop MSA British Touring Car Championship has today (18 March) confirmed a huge 31-car grid for the forthcoming 2014 season. Announced at its annual Season Launch at Donington Park, all BTCC machines will run to NGTC (Next Generation Touring Car) specifications for the very first time.

Allocation of the newly introduced TOCA BTCC licences (TBLs), required for teams in order to guarantee participation for the next three seasons, has exceeded the original allowance of 30, with TOCA approving 31 entries for the new season. All TBL holders are obliged to contest every round while TOCA has retained one final TBL, which it may loan to a suitable entry at any stage during the year.

As noted above, the entry list is completely made up of NGTC cars, which completes the planned final transition to the new specification machines since the introduction of the regulations in 2011. Not only does this year’s grid boast incredible strength in numbers, but the NGTC rules have also significantly aided the diversity of cars now seen on the entry list. 14 models from 11 different manufacturers will be represented in 2014, with the total number of cars on-track expected to be the largest in the series’ 2-litre history.

Adding to the impressive numbers and variety in the 2014 line-up, a quality field has also been further enhanced with seven champions making the grid, and a further five drivers having already won BTCC races.

Stability and longevity among its partners and sponsors also remains a key asset to the BTCC with all of its major ongoing commercial partners cemented for multi-year deals. For example, Dunlop has extended its title sponsorship and tyre supply term and ITV will continue to broadcast live coverage of every event until at least the end of the 2016 season. The Haymarket Consumer Media group has also joined the BTCC’s family of partners after inking a three-year deal to provide extensive and in-depth BTCC content across all of its major publications, with Autocar, WhatCar? and PistonHeads.com at the forefront of the agreement.

This year’s Dunlop MSA British Touring Car Championship will again comprise of 30 races across ten events at nine venues around the UK, with the season commencing at Brands Hatch on 30/31 March and concluding on the legendary Grand Prix circuit at the same venue on 10/11 October.

The BTCC field will include an unprecedented seven champions in its ranks, headed by reigning supremo Andrew Jordan who took his maiden title during an unforgettable 2013 season. Jordan fended off four former champions last season and the 24-year-old will defend his title in the Pirtek Racing Honda Civic.

2012 champ Gordon Shedden fell short of retaining the crown by just seven points last season. The Scotsman and his three-time champion team-mate Matt Neal both remain with Honda Yuasa Racing in 2014, but the duo will be piloting the all-new Civic Tourer model.

Jason Plato has won more BTCC races than any other driver in history and despite the MG driver coming close in 2013, he has just one goal for the year ahead: to win a hat-trick of championships.

Colin Turkington returned to the BTCC in 2013 after a three-year hiatus and produced a stunning effort. The Ulsterman remained in title contention until the final day of the campaign, despite his BMW 125i M Sport only breaking cover on the eve of the season. His eBay Motors squad has a year with the car under its belt and a strong pre-season behind them, so Turkington is confident of contending again.

The two biggest announcements in the off-season proved to be the return of two double-champions in Alain Menu and Fabrizio Giovanardi. Menu, a legend of the much loved Super Touring-era will be driving a VW Passat for Team BMR this time around, whilst Giovanardi will be spearheading the challenge from Airwaves Racing.

Variety is the spice of life

The NGTC rules were first introduced in 2011 with the intention to provide greater competition at a reduced cost. The plan was to phase in the new specification cars into the series over a three-year period and that programme is now complete with all cars running to NGTC spec.

The BTCC has one of the most varied grids of any major motor sport championship in the world, with some 14 models from 11 different marques making up the class of 2014.

The Goodyear Dunlop group has provided title sponsorship and official tyre supplier to the BTCC for a decade, and has further extended its partnership in both areas during the off-season.

The new multi-year deal continues Dunlop’s association with the series since its inception in 1958.

Such a strong partnership does not mean a simple continuation of service, however, as Dunlop continue to develop tyre technology in the BTCC. This year will see the introduction of an all-new compound across all of its Sport Maxx range, which is based on a new construction to offer improved driver feedback and confidence.

As per 2013, every driver will have to nominate one of the three races on each weekend (except Thruxton) in which to run the soft compound instead of the medium construction.

In a new development Dunlop will now reveal each driver’s tyre choice via its social media feeds at 10am on race days, whereas previously spectators and competitors would not find out until the cars had reached the grid. In a joint decision with TOCA, it’s believed that this introduction will provide fans with yet more talking points ahead of the action.

ITV will continue to screen around seven hours of live free-to-air coverage from each event on both its ITV4 and ITV4 HD channels as well as the itv.com website. Adding to the coverage are 60-minute edited race highlights repeated three times after each event on ITV and ITV4 as well as their respective HD channels and ‘simulcast’ on itv.com. In total more than 230 hours of the BTCC will be broadcast across the ITV network each season until at least 2017.

Commentators David Addison and Tim Harvey have signed new three-year deals with the broadcaster, as have presenters Steve Rider and Louise Goodman.

The BTCC will also enjoy greater coverage in major print and online publications thanks to its new media partnership with Haymarket.

Autocar, What Car? and PistonHeads logos will feature on the BTCC cars throughout the 2014, 2015 and 2016 seasons, as well as on official interview and podium backdrops, as the group provides extensive coverage of Britain’s premier motor sport series.

BTCC Series Director Alan Gow said: “Our huge entry list is a clear demonstration of the success of the championship and the NGTC regulations. 31 cars on the grid is a modern-day BTCC record and the quality of the field, including seven champions, is also at a real high. That calibre of driver wouldn’t be here if they didn’t see that the championship is in rude health, but we also have to remember that many of those have the BTCC to thank for making them household names in the first place.

“The long-term value of the NGTC cars, as well as our new TBL system, is also proven. Adam Morgan’s Mercedes for example is made up mainly of internal parts that came from his car last season, whilst Lea Wood will now be using the Toyota shell previously raced by Morgan. This car and its parts originated from one of the first NGTC machines used in 2011, which is testament to the way the rules have allowed some teams to join the championship that wouldn’t have been able to previously. Such has been the success in fact that from this point onwards the term NGTC will no longer be a factor in the BTCC, because the next generation of touring cars are here now.

“Our major partnerships have either been renewed or consolidated over the off-season too. Dunlop has recommitted for a further multi-year term and ITV has re-signed its BTCC commentary and presenter team until at least 2017. The TV audiences and trackside audiences continue to grow, which is yet more evidence why the BTCC is Britain’s biggest and most successful series.

“I have no doubt that 2014 will prove to be one of the most exciting and competitive season’s in the illustrious history of the BTCC.”