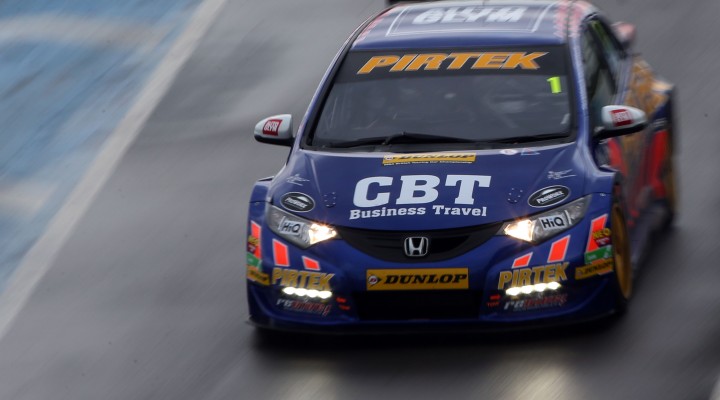 Pirtek Racing’s Andrew Jordan posted the fastest lap time of the day in the only official pre-season test ahead of the 2014 Dunlop MSA British Touring Car Championship. Jordan, who clinched the title in the final round of last season, was just 0.001s ahead of Honda Yuasa Racing’s Gordon Shedden.

The incredibly close times were set early on in the four-hour session that made up the afternoon of the Season Launch at Donington Park. Following a morning of media activity, the public streamed in to watch a test that was run in ever-changing conditions.

The vast majority of the 31 entries immediately went out on circuit, with the top twelve covered by just over a second in the early running, before a heavy rain shower brought everyone back into the pits. Intermittent rain showers for the rest of the day ensured that no faster times were set, with Jordan and Shedden followed in the times by returning double-champion Alain Menu who lapped the Donington Park National Circuit in 1:11.226s to go third fastest. While the limited dry running means that the outright pace of the 2014 field remains unknown, Menu’s competitiveness bodes well for the Chrome Edition Restart Racing squad as fellow VW CC driver Aron Smith also posted a strong time to go seventh quickest.

Adam Morgan’s brand new WIX Racing Mercedes-Benz A Class impressed on its first official outing in the BTCC. The Lancastrian put in the fourth quickest time ahead of the newly-liveried MG KX Clubcard Fuel Save MG6 of Sam Tordoff, and Honda Yuasa Racing’s Matt Neal in the eye-catching Civic Tourer. Colin Turkington headed up the eBay Motors trio of drivers in eighth, three tenths of a second ahead of team-mate Rob Collard, with BTCC rookie Tom Ingram taking tenth for Speedworks Motorsport.

While Ingram’s tally of 59 laps was impressive, Marc Hynes completed the most mileage of any driver – 64 tours in total – and ended the day just 0.006s outside the top ten.

With five of the seven champions occupying top ten slots, the 2014 season remains almost entirely unpredictable. Fabrizio Giovanardi is getting to grips with the Airwaves Racing Ford Focus on his return to the series and went twelfth fastest; with fellow double champion Jason Plato not putting in any competitive dry running.

The teams now have less than two weeks to prepare for the opening rounds of 2014, to be held at Brands Hatch on 29/30 March.

Andrew Jordan said: “It was a little bit frustrating. We were about to put a new set of tyres on when it started to rain – it’s always nice to end up quickest, but it wasn’t really a proper day because of the weather and we had quite a lot to try out that we haven’t been able to do. It means that we’ve still got some unanswered questions going to Brands Hatch, but we know we’ve just got to get on with it. The car felt fabulous in the wet, so it was a case of trying a few things and then parking it up. If that had been free practice or qualifying I’d have been very happy with the car. It’s been a busy day, and the amount of people here just shows what the championship is like at the moment. There’s a real buzz about it – it’s one thing talking about it but to see the turnout we’ve had here today is just really good. I’m proud to have the number one on my car and I’m looking forward to the excitement starting in a couple of weeks!”

Gordon Shedden said: “You need things to go your way, and with 31 cars on the grid you never know what’s going to happen this year. All I hope is that come race 30 at Brands GP I’m in with a cracking chance of winning the title back. I know what an amazing feeling it was to win it in 2012 – I know it’s going to be harder than ever but without a shadow of a doubt I’m going for it this year. We’ve had a lot to do with the car, there have been a lot of new challenges but from an engineering point of view it was important to push the boundaries. I’m sure we’ll be in the mix, we’ve just got to keep working. This year we’ve got 31 cars on the same tyres with a lot of levellers to keep things close. Seven champions and a whole host of other race-winners means this is going to be one hell of a season.”

Alain Menu said: “The times don’t mean too much – it was mixed conditions and we don’t know what the other guys were doing. I actually only did three proper timed laps in the dry, and we didn’t do any wet running because we’re testing tomorrow. The guys have worked really hard though and have done a great job. It’s good to be back – there was a really good turnout and the atmosphere is great. Everyone I’ve spoken to has been very excited about this year, and the number of fans here for the test was really impressive also. It’s going to be a good season!”