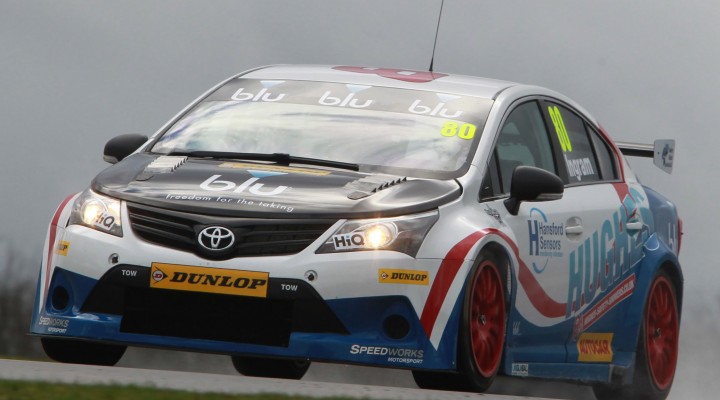 Speedworks Motorsport is heading into its fourth season in the Dunlop MSA British Touring Car Championship quietly confident about its prospects for success, with a new driver and a car that it has run since 2011. With a single Toyota Avensis in 2014, Speedworks has recruited three-time Ginetta Champion Tom Ingram to drive for the forthcoming campaign. The team  has been busy lapping up the testing miles in recent weeks at Silverstone, Oulton Park, Brands Hatch and Donington Park – the latter the scene of the championship’s annual Season Launch.

There, KX Akademy graduate Ingram impressed by placing inside the top ten on the final timesheets and claiming leading rookie honours. With preparations almost complete, Speedworks team principal Christian Dick is hopeful of a solid start in the opening round at Brands Hatch this weekend (March 29/30).

“We’ve had an extremely positive and encouraging off-season,” he affirmed. “Obviously you always want more track time to be able to test, develop and refine the car, but I’m confident we’ve made the very best use of the resources we have available to us and that we’ve taken a sizeable step forward since the end of last year. As a team, we’re working together more efficiently than ever.

“The BTCC is a tremendous challenge, and I have to say that this is the first time we’ve gone into the season really in control of everything. Previously, it’s always been a bit like we’ve been hanging onto the back of a high-speed freight train – whereas this year, it feels like we are in the driving seat.”

Speedworks regularly ran at the front during free practice and qualifying in 2013, but didn’t quite achieve the results the time sheets suggested were possible on race day.

Dick continued, “This is our fourth consecutive season running the Avensis, and we’ve got a really good grasp of it now. We had a few difficulties in 2013 when although it was fast, it could also be a bit of a handful at times, but we’ve ironed those little issues out over the winter and it seems to be a much stronger and more consistent package, which will hopefully ease Tom’s learning curve.

“I actually have to keep reminding myself that Tom is only 20 – he has such a mature head on his young shoulders. He is a real breath of fresh air and an absolute joy to work with. He settled into the team and got to grips with the Avensis incredibly quickly. His first test in the car was at Silverstone in what can only be described as horrendous conditions; there was a lot of standing water on the track, yet he never put so much as a wheel out-of-place. Our first dry running was at Oulton Park, and Tom was rapidly on the pace.

“It’s always difficult to know at Media Day who is running what level of boost or ballast and who is on new tyres or old – but what we do know is that we certainly didn’t put new tyres on, there’s a little bit of weight to come out of the car and we still had the older-spec engine in. We have plenty up our sleeve yet to look forward to.

“That said, I’m mindful of not putting either Tom or the boys under too much pressure. The primary objective for Brands Hatch will be to stay out-of-trouble and notch up three race finishes, especially with 31 cars on such a short circuit and at the start of a season that has seen so much hype and anticipation. Points are obviously the goal, and if we can kick off proceedings with a top ten or two, that would be fantastic.

“If we have a clean run and do everything right, I think we’ve got a chance of achieving that – and then we can shift our sights a little bit higher as the year progresses, especially with the developments still to bring to the car and as Tom increasingly finds his feet in the championship. By mid-season, I would hope we can be regular top ten contenders again – and with the reversed grid format for the final race of the weekend, who’s to say we can’t start targeting our first BTCC podium…”