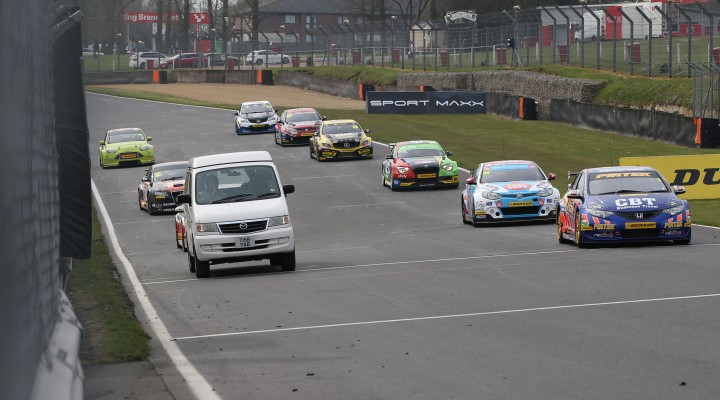 The BTCC has starred on tonight’s (29 March) Ant & Dec’s Saturday Night Takeaway on the eve of the new season.

Filmed at Brands Hatch on Friday afternoon, the humorous video for the hugely popular show featured ten BTCC cars and real-life gran Lyn Cahill, who took part in a mocked-up race in her family wagon! Her family were surprised live on TV during the show as Lyn was seen taking part in a number of wild and wacky events over the last week.

The BTCC race featured the likes of reigning champion Andrew Jordan, Jason Plato, Gordon Shedden, Colin Turkington and fans’ favourite Rob Austin. Our racers all blasted around the 1.2 mile Indy circuit in their respective BTCC flame-spitting machines, whilst Lyn had to compete in a Mazda Bongo!

“I’ve had so much fun,” said Lyn. “It was a bit daunting being out there on the circuit with all the racing cars, and the noise was pretty deafening, but I was really getting into it by the end of the race.”

The serious business of the 2014 Dunlop MSA British Touring Car Championship gets underway with the opening three rounds tomorrow, which you can see live and exclusively on ITV4 from 10:30.