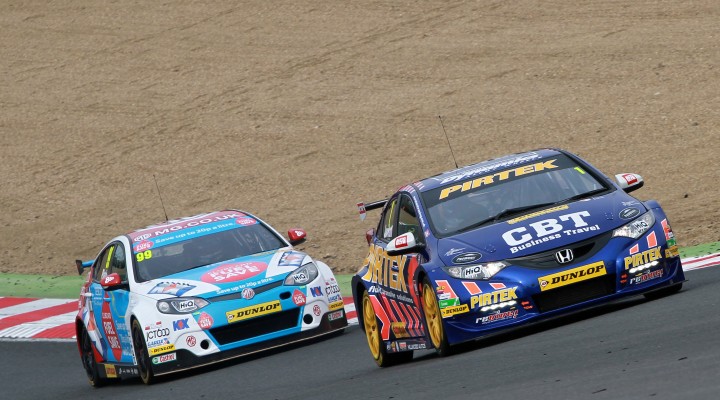 Andrew Jordan has kicked off his title defence in fine style by securing the first pole position of the 2014 Dunlop MSA British Touring Car Championship at Brands Hatch.

Jordan took top spot in the same event last season, but the 24-year-old went even faster this time around to pip the MG of Jason Plato by 0.012s. Jordan left it extremely late to set his fastest flyer, as did eBay Motors’ Colin Turkington who claimed third place on his final tour.

Incredibly close times have been the theme throughout the day on the tight 1.2 mile Indy circuit and qualifying proved no different with the top 23 cars covered by just over eight tenths of a second.

Honda Yuasa Racing’s debut with the new Civic Tourer proved fruitful and although they slipped back with Jordan and Turkington’s last gasp efforts, the squad will be content with its performance. It was Matt Neal who led team-mate Gordon Shedden and the duo will line up fourth and fifth for tomorrow’s season opener.

Arguably the performance of the day came from young debutant Tom Ingram, who backed up his top six practice pace with exactly the same result in qualifying. The Speedworks driver’s commitment through the legendary Paddock Hill Bend was there for all to see, and he set the third fastest first sector of any driver in the field and pushing hard on his final run almost ended the session in the barriers. He just recovered the car and was absolutely delighted with his final grid slot.

Chrome Edition Restart Racing also deserve enormous credit with its pairing of Aron Smith and Alain Menu separated by just 0.028s in seventh and eighth respectively. The team certainly enjoyed less pre-season running than the majority of its rivals, but the VW CC has proved immediately quick and Smith’s position equals the highest for the machine since it was introduced to the series last year.

Mat Jackson’s Airwaves Racing Ford Focus and the eBay Motors BMW of Rob Collard were ninth and tenth fastest – the former scoring his first top ten grid slot since the 2012 season finale. Rob Austin’s popular Audi will line-up on row six alongside MG’s Sam Tordoff, who himself endured his lowest qualifying position in his short BTCC career so far.

Notable absentees from the top order included the Mercedes A-Class of Adam Morgan, which had run extremely well during testing, and the Ford Focus of two-time returning champion Fabrizio Giovanardi.

Incidents were at a minimum, as were issues involving the newly introduced track limit regulations, with only drivers towards the rear of the field suffering. The Audi A3 of Rob Holland recovered from a minor spin, whilst Jack Clarke, James Cole, Glynn Geddie and Aiden Moffat were among those to have their quickest lap times removed after running off limits.

Now the attention turns to the opening three rounds of the 2014 BTCC season, which will take place at the Kent venue tomorrow. The first race gets underway at 11:45 with ITV4’s live and exclusive coverage commencing at 10:30.

Andrew Jordan said: “It was a really really good lap. It felt pretty quick but I had a little moment. It’s so close out there but it’s going to be cracking tomorrow. There’s going to be a load of fans here and the weather’s going to be great, so I can’t wait to get the racing underway.”

Jason Plato said: “I’m a little disappointed – I didn’t quite get the best time at the right moment. The car feels good and it was a good fight for pole. There was nothing in it but congratulations to Andy. The most important thing tomorrow is three good points finishes. I personally think that P2 is the best spot to start here at Brands Hatch so let’s spray some champagne tomorrow and go home happy!”

Colin Turkington said: “We’re in much better shape this year and I’m really pleased to be on the second row. We still haven’t completely pinned the car down and that lap didn’t come easy. The aim is to be first after 25 laps but if we get a good start then we could get into the lead early. With such a tight grid this year it makes qualifying even more important so I’m delighted with that.”

Click here for the classification from qualifying at Brands Hatch.