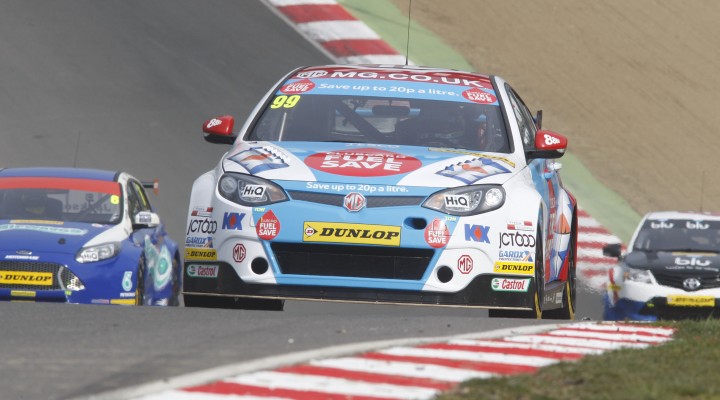 Jason Plato has topped the first practice session of the 2014 BTCC season after edging out the BMW of Colin Turkington and Honda Civic of Andrew Jordan.

MG’s Plato headed a list of 22 drivers that all lapped the 1.2 mile Brands Hatch Indy circuit within one second of the ultimate pace. 29 cars made it out for the session, with only Ollie Jackson failing to make it due to a noise limit issue with his Proton.

Jordan and Plato picked up where they left off in 2013 by trading early blows for the fastest lap, a battle that also included the brand new Mercedes A-Class of Adam Morgan. The WIX Racing machine had shown impressive promise during pre-season testing and backed-up it up here in FP1, with Morgan ending up fifth on the timesheets behind Matt Neal’s Civic Tourer.

It was Plato, however, who earned the opening session bragging rights from Turkington and Jordan, after setting a time quicker than the 2013 pole position lap.

“We’re just going through our programme this morning,” said a philosophical two-time champion. “To get the feeling back in the car today is a great thing because the last time I had it was three weeks ago! These sessions are all important and we’re making progress, but being fastest at this stage isn’t the most important thing.”

Turkington endured a tough time at Brands Hatch last season with his campaign ultimately starting and ending in disappointment. Overall, it was a stellar season, however, for the Ulsterman and his eBay Motors team and now he’s feeling confident of a productive 2014 season opener.

“The car’s feeling good – better than when we tested here and considerably better than what we had here last year,” said Turkington. “I’m a lot more confident in the car – particularly the rear axle which which was our weakness in 2013. Everybody has got the luxury of running on brand new tyres today, and that certainly helps make the car feel more balanced, but we are moving in the right direction.”

It proved to be a good session for Chrome Edition Restart Racing, with Aron Smith completing the top six order and his VW Passat team-mate Alain Menu finishing in tenth. Ahead of the returning Swiss driver were solid runs for Rob Collard, Sam Tordoff and Gordon Shedden in the BMW, MG and Honda respectively.

The lead Audi of Rob Austin was squeezed outside the top ten and he was just 0.020s ahead Jack Goff’s Vauxhall – back at the Kent venue where he scored his maiden BTCC podium at the end of 2013.

Top rookie and top Toyota honours went to Tom Ingram in the Speedworks Avensis, who pipped Warren Scott’s Insignia into 13th. Airwaves Racing could only manage 15th and 16th in the hands of its multiple BTCC race winners Mat Jackson and Fabrizio Giovanardi.

28 of the 29 runners circled without problems although the Chevrolet of Chris Stockton propped up the timesheets after completing just eight laps before briefly stopping on circuit with a throttle problem.

Credit must go to the Houseman Racing squad who ran its Toyota Avensis flawlessly, despite it being its first time on track. Lea Wood completed 29 laps in the newly built machine and was just 1.8s off Plato’s pace at the finish.