Plato the man to beat in Free practice 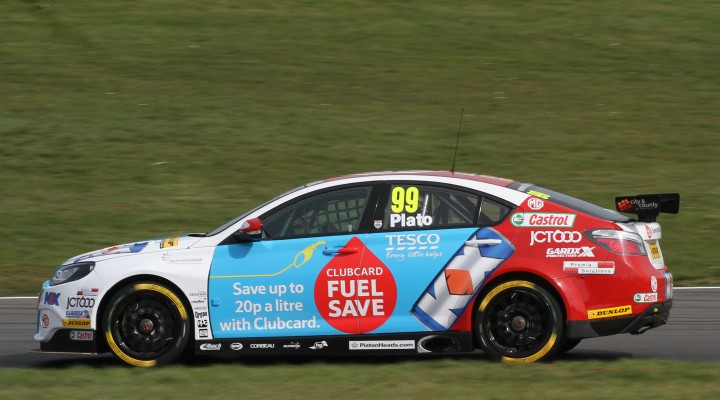 Jason Plato has set the pace in both free practice sessions at Brands Hatch today (29 March). After topping the first session this morning, Plato repeated his performance in the MG KX Clubcard Fuel Save car to go fastest from RCIB Insurance Racing’s Jack Goff and Pirtek Racing’s Andrew Jordan. In a session that was incredibly close, the top 24 cars were covered by less than 0.9s.

Putting in a fast lap early on, Plato stayed at the top of the time sheets for the majority of the session, improving his time slightly towards the end of the 40 minutes. For the first half of the session the top three mirrored FP1 with Colin Turkington and Jordan on the pace, but by the end of the session the eBay Motors 1 Series BMW had dropped to seventh place just ahead of the Honda Yuasa Racing pairing of Gordon Shedden and Matt Neal who are working hard on set-up for the new Civic Tourer.

Goff’s impressive time in the Vauxhall Insignia came in the last moments of the session following a brief red flag period caused by Goff’s Team Owner Warren Scott spinning into the gravel on the exit of Paddock Hill Bend. Goff impressed at the Brands Hatch finale last year, finishing second in the final round to take his first BTCC podium.

“We were here testing last week, and it seems to have worked!” said a buoyant Goff immediately after the session. “We tried something in the first session which was a gamble that didn’t really pay off, but we’ve changed it and the car is absolutely fantastic now. The lads have done an incredible job over the winter. It’s so close around here that if we get a clean lap in qualifying we’ll be right up there, but there will be more than a bit of luck involved.”

Plato’s MG team-mate Sam Tordoff posted the fourth quickest time just 0.043s behind the double champion. The Leeds-based racer, who scored a podium on debut for MG at the opening round last year, put in his fastest lap late in the session on the 21st of his 26 laps completed.

Aron Smith continues to impress in the VW CC having made the move to Chrome Edition Restart Racing this year. He went one better than his sixth place in FP1 to get within 0.058s of the outright fastest time. Smith said, “This is the first I’ve ever driven a car that it is immediately bang on the money. It’s still an effort to drive but we’ve got a good solid base set-up and the pace is there in the car. It’s going to be manic – like a race in qualifying. If you consider there’s 30 cars in 48 second lap so there’ll be cars everywhere, but we’re in the ballpark that lots of people are trying to get to. People said the longer wheelbase cars could struggle in the tight circuits, but that simply isn’t the case. There’s a good grip and balance in the car and I’m really looking forward to qualifying.”

Smith’s team-mate and returning double champion Alain Menu had a few issues with his VW, but was within half a second of Plato’s time. He said, “We’ve have some problems with my car that we need to work on, but the encouraging thing is that we were only half a second off the pace having set just one flying lap.”

Perhaps the surprise of the session was Ginetta GT Supercup graduate Tom Ingram, who was fifth quickest for Speedworks Motorsport in the Toyota Avensis. Ingram was another driver to post his time late on, with track conditions near-perfect on this unusually warm March weekend.

All thirty cars running this weekend set flying laps – with Ollie Jackson taking his Proton out on-track for the first time. Glynn Geddie’s United Autosports Toyota Avensis pulled off the circuit with engine issues early on, although the BTCC rookie had been running well until then. With so many cars up and running this afternoon’s qualifying session is sure to be full of action, and you can watch the session live at 15:40 on the ITV website.