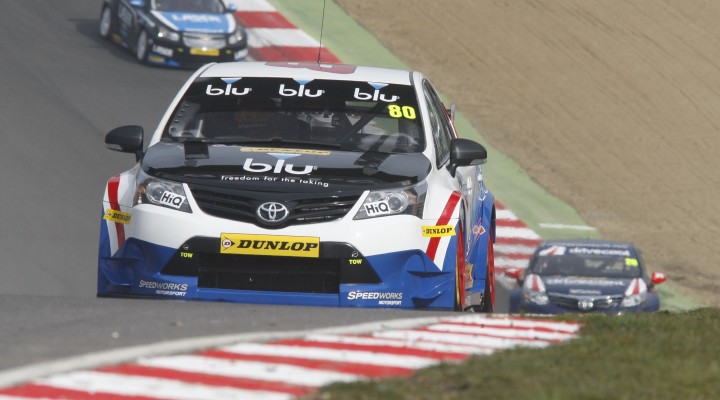 Five former champions occupied the top five places in the opening Dunlop MSA British Touring Car Championship qualifying session yesterday (29 March). The driver in sixth position was, however, something of a surprise, as BTCC rookie Tom Ingram put his Speedworks Toyota on the third row of the grid for today’s opening race.

Ingram was knocking on the door of the top ten in the first free practice session of the morning and impressed in FP2 by posting the sixth fastest time. To maintain that pace during qualifying was going to be a big ask for the 20-year-old from High Wycombe, but he did just that. His qualifying time of 48.404s would have been good enough for pole position in 2013, however in the warmer conditions and on this ultra-competitive grid the time put Ingram in sixth.

It was a result neither team nor driver was expecting, and after the session was over, Ingram told btcc.net, “My hands are still shaking after that one! I’m absolutely over the moon – I said coming into the weekend that I didn’t really have any expectations and that I’d run my own weekend, but it hasn’t really worked out like that and now I’m running with the big boys!

“To qualify sixth… I never expected that in a million years. To be a tenth and a half off pole is pretty crazy. After this morning’s FP1 I said to the team we’ve got pace to find in the car, and all of a sudden the car was changed and the car was on the pace. I can’t thank the team enough ­– now all I need to do is carry this pace on into the races.”

Team principal for Speedworks Christian Dick was equally thrilled with the result. He said, “Honestly we weren’t expecting that. I know that Tom is good, I know we’ve made some improvements with the car, but my aim was to be knocking on the door of the top ten. With the grid as competitive as it is being in the top half would be a result, but we’ve smashed it and with only five former champs in front of him Tom has done an absolutely stunning job.

“Tom has been a touring car fan for a long time, he knows the job inside out and I hopefully won’t be telling him anything new for the races. We’re just going to make the pit garage as slick and calm as possible so he can focus on the racing – if we can hold station and finish where we start it will be a great day. For race three we’ll probably push a bit more and see what Tom can really do!”

The races are all shown live and in high definition on ITV4 and on the ITV BTCC website.