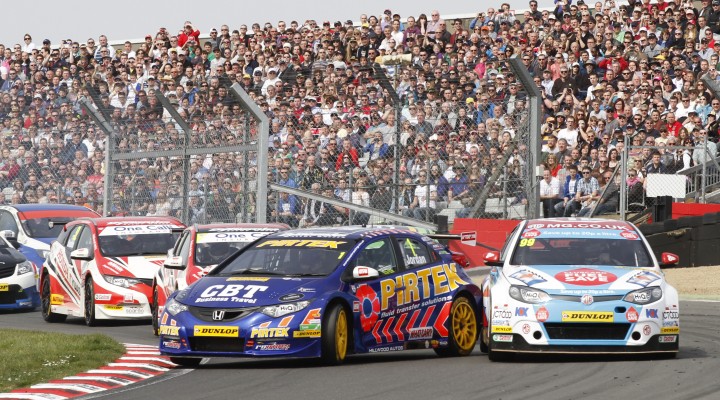 Matt Neal took the first ever podium for the all-new Civic Tourer as he crossed the line just 0.410s ahead of Honda Yuasa Racing team-mate Gordon Shedden. “It’s the first time an estate car has scored a podium in the BTCC,” noted Neal. “It was great to see Flash behind me too and great points for the team.”

It was Colin Turkington’s eBay Motors BMW that seemed set to challenge for the lead as the huge field blasted off the line, but he was expertly boxed in by Jordan’s Honda Civic and the MG of Plato. It was to be the closest the Ulsterman would come to troubling the lead order as his pace began to fade.

Neal muscled his way by the BMW at Clearways early on and Shedden repeated the trick at mid-distance, just when it had looked as though Turkington would reignite his challenge. His speed dropped off rapidly thereafter, and he was soon passed by the hard charging Rob Austin, who had hauled his Audi A4 up the order throughout the contest.

Team-mate Rob Collard and the VW CC of Aron Smith shuffled the 2009 champion further down the order in the closing laps, and Turkington had to settle for eighth at the finish.

Tom Ingram finished an impressive ninth after defending in a race-long tussle with fellow young gun Sam Tordoff. The Speedworks Toyota had been squeezed down from sixth on the run up to Druid Hairpin for the first time, but Ingram’s pace thereafter was solid.

Up at the front and both Jordan and Plato had pulled well clear of the chasing pack at the finish, with the former going on to score his first ever BTCC victory at Brands Hatch. “What a race,” beamed Jordan. “I got a bit sideways at Paddock but saved it with full lock and full throttle. Jason was strong in a few areas but I could gap him in others. It looked as though JP and I planned the start but in truth I just didn’t get away particularly well and Colin got boxed in. I’ve never won at Brands Hatch Indy so it was a great job and a massive thanks must go to the team.”

Plato was more than content to follow Jordan home, saying, “I had a bit more pace than Andrew but at this stage there’s no point in taking risks. I had planned to go again when the back-markers came into play but Jordan didn’t make any mistakes. It was a good race.”

Some well-known names endured dramatic opening races with Alain Menu spinning on the exit of Paddock Hill Bend on the first tour, whilst the Airwaves Racing Ford Focus of Mat Jackson was tipped into the gravel by Smith’s VW CC. Both recovered with Jackson scoring the final championship point on offer, although the multiple race winners will feel their respective pace deserved more.

The only other real incident of note was a clash between the Pirek Racing Civic of Martin Depper and United Autosport’s James Cole, leaving both cars pointing in the wrong direction after contact at Druids. Cole dragged his Toyota Avensis into the pit lane and into retirement, whilst Depper made the chequered flag on his return to the series.

Marc Hynes’ BTCC debut ended in disappointment as his MG pitted with a problem after the green flag lap, and he failed to rejoin.

Click here for the race one classification. Race two gets underway at 14:15  with ITV4’s live and exclusive coverage continuing throughout the day.