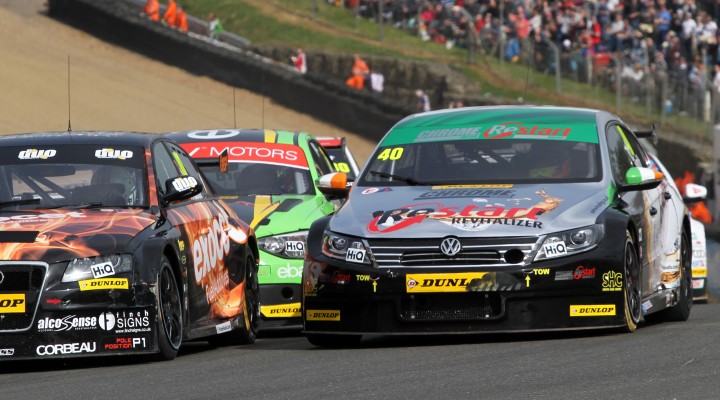 Ever since announcing the return of double champion Alain Menu to the 2014 Dunlop MSA British Touring Car Championship there has been much talk about Team BMR.

Attracting a proven race winner to its ranks ahead of a second season in the series was a clear indication of the seriousness of the project, as was its acquisition of the machinery previously raced by Team HARD.

Aron Smith, Jack Goff and team boss Warren Scott confirmed a solid and competitive quartet of racers, but the question remained over the pace of its cars. Despite the results from last weekend’s opening event at Brands Hatch suggesting it was an indifferent season bow, it doesn’t tell the full story of the squad’s performance.

Smith was the standout Chrome Edition Restart Racing driver on Saturday, backing up top six pace in both practice sessions with a seventh fastest time in qualifying. His VW CC team-mate Menu wasn’t far behind in ninth, despite the team working on a number of issues with the car during much of the morning running.

Goff and Scott could only manage 15th and 22nd respectively in their Vauxhall Insignias, but remained confident of being able to show solid race form come Sunday afternoon. And so it proved for the duo as Scott scored his first championship point since the second race of last season – also at Brands Hatch – while Goff showed continued improvement throughout race day. Three points scoring finishes for the RCIB Insurance racer, including an eye-catching eighth place in the final contest sees Goff sitting ahead of his stable-mates in the early championship standings.

The story for Smith and Menu was probably one of missed opportunities, although both produced flashes of brilliance. Smith’s seventh place finish in the season opener was impressive, but it was as good as it got for the Irishman, as two penalties left him down the order in race two before race three ended in retirement.

Chrome Edition Restart Racing’s real highlight came from legend Menu. The Swiss driver spun to the rear of the order in race one, before a spirited fight back in race two left him just outside the points. Running on the harder Dunlop Sport Maxx compound for the final showdown, Menu produced one of the drives of the day as he surged from 17th on the grid to take fifth as the chequered flag fell.

The drive had the huge crowd on its collective feet – Menu is back… but only time will tell if both he and Team BMR can sustain the challenge.