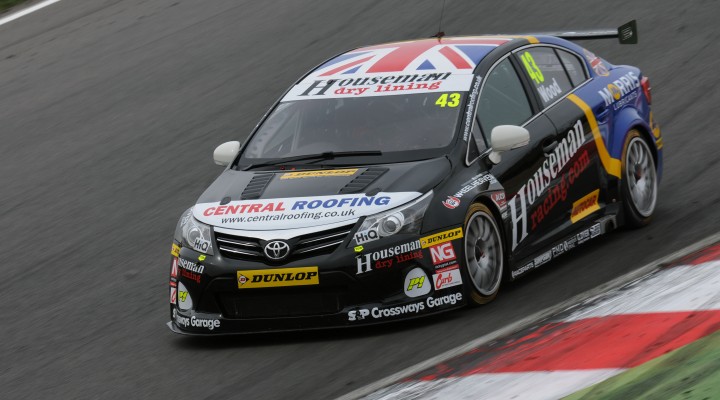 The 2014 Dunlop MSA British Touring Car Championship grid is made up entirely of NGTC specification after completing its planned transition from S2000 machinery. The driver who’ll be remembered for closing the chapter on the S2000 era is Lea Wood after claiming the inaugural Jack Sears Trophy with an impressive 18 class wins from 30 attempts.

Wood was one of the last confirmed entries on the capacity grid this year, and his family-run Houseman Racing squad was in a race against time to get its new Toyota Avensis ready and running for the season opener at Brands Hatch. Following some very late nights for the squad in the workshop the car arrived at the Kent venue ready to run, and Wood himself was over the moon to be able to re-join the BTCC battle following such a successful 2013 campaign.

“It’s a very special feeling to be back,” he said. “I didn’t think we’d be here, but we are and it really has been a great team effort to get us out and ready.”

With Brands Hatch being the first running for the Houseman-backed car there were some mechanical issues, as a problem with the power steering on the car put Wood on the back foot early on, but despite this he qualified with a respectable time of 49.479s to put him 24th on the grid.

Solid times and reliability teething problems were to be the story of Wood’s weekend, as in two of the Sunday’s three contests he did not manage to complete the full race distance. Despite this, he was able to turn 55 racing laps on the Sunday, providing the team with a wealth of valuable data about its new car, and the Hereford racer remained upbeat about the season ahead.

He added, “We’ve got our chance now with this NGTC car. Having performed so well last year there was always going to be a bit of pressure on this year to step it up and I know we can do it. It’s going to take a bit of time to get up and running and work through the issues, but I’m sure we’ll get there.”

You can see how Lea gets on in the second event of 2014 at Donington Park this weekend. Tickets are available to purchase here.