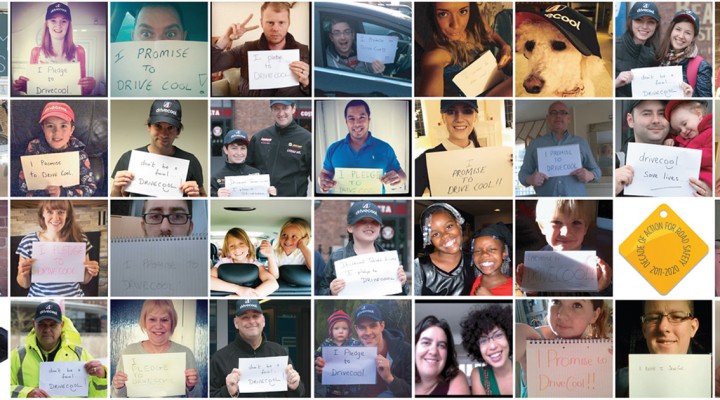 United Autosports driver James Cole is sending out an important message during his BTCC campaign in 2014 and that is to ‘Drivecool’.

Cole launched the campaign last year as a result of his own personal experiences when he was knocked down and badly injured as an 11-year-old schoolboy. His post collision medical care, which was overseen by the late Prof Sid Watkins – the FIA’s Formula One safety and medical delegate – further inspired him.

James is championing and promoting the increased implementation of 20mph speed zones in urban areas whilst encouraging road users to take a greater sense of responsibility and change their behaviour.

James’ is asking BTCC fans, young or old, to get involved too, saying, “We’re asking as many people as possible to take the Drivecool pledge and promise to ‘keep it cool’ on the roads by uploading and sharing a selfie with their Facebook friends to help spread the word.”

“You can also Tweet your photo to @DrivecoolUK with a poster or message saying ‘I promise to Drivecool’ and anyone that does will receive a free ‘Drivecool’ cap.”

Although promoting the not-for-profit organisation Cole will not be holding back when it comes to racing at Donington Park this weekend.

“Qualifying times of the Toyota at Donington last year suggests that the Avensis has pace there,” he concluded. “But Brands proved just how competitive the series is this year and so we can’t rely on last year’s times and efforts as every car is pushing to find that last tenth.

“Donington is a lovely flowing circuit, fantastic for racing. I have fond memories of racing there in Formulae Ford and F3 – the latter being the last time I raced here.”

James and the rest of the huge BTCC grid will be out on track at 10am for the opening free practice session of the weekend and btcc.net will keep you updated with all the action.