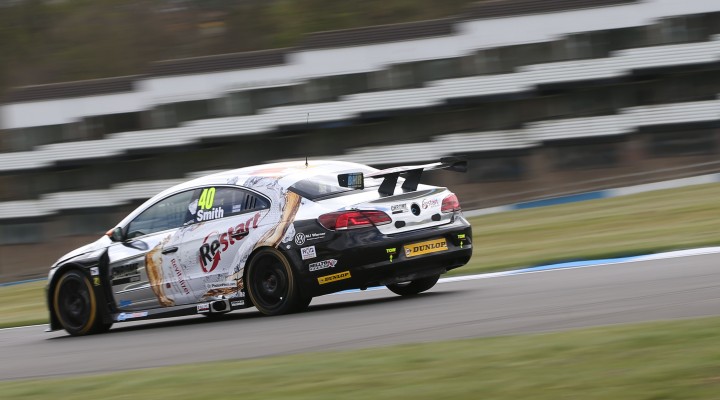 The Chrome Edition Restart Racing VW of Aron Smith set a blistering pace in free practice one at Donington Park, eventually beating his own earlier benchmark to clock a final flyer of 1:10.041s.

Such was the speed of the Irishman that his lap time has already dipped under Gordon Shedden’s pole position effort from 2013. It was Scotsman Shedden who followed Smith this time around, but of course in the all-new Honda Civic Tourer, which has proved to be on the pace from the outset.

“The car feels unreal,” said Smith. “We’ve just played around with a few bits, jumped in and straight away I knew the thing was going to be a rocket ship. Now it feels at the point where I can forget about trying to drive fast, just relax and the car does whatever I want. There’s two areas where we can definitely find a couple of tenths so we’ll try it out and if it works it works and if it doesn’t then we’ll still be in good shape.”

Shedden was also pleased with his car’s performance, but feels that even more may be needed for qualifying this afternoon. “If the weather stays the same I think the times this afternoon will be ballistic – there’s more to come yet,” he beamed. “We worked through a good few things in that session and it’s given us a good starting point. The championship is just so competitive now you’ve got to try and maximise qualifying.”

Brands Hatch race winner Colin Turkington completed the top three as he looks to go well again at the Leicestershire circuit. Turkington and the eBay Motors squad have fond memories of Donington having secured the first ever victory for the BMW 125i M Sport here last season.

“Qualifying is going to be really important – around Donington you want a car that gives you confidence through the high speed sections,” reflected Colin. “Down Craners, up Macleans and through Coppice is where you need to be fast – stability is the key for this circuit so that’s what we’re working on this morning.”

Neal confirmed the Civic Tourer’s potential by setting the fourth fastest time and with significant weight on the car, whilst Triple Eight’s Marc Hynes produced his most impressive display so far with fifth. The former British F3 champion exceeded track limits on a number of occasions during the session but he also recorded several front-running laps, which bodes well for the MG6 driver.

Jason Plato had to make do with being the second fastest MG driver and it was line astern as his MG KX Clubcard Fuel Save team-mate Sam Tordoff followed the two-time champion in seventh.

The rise of Team BMR continues to take shape as Jack Goff’s Vauxhall Insiginia and Alain Menu’s VW were inside the top ten, backing up Smith’s pace-setting form, although Menu ended his session with a lurid spin at the final chicane.

Adam Morgan WIX Racing Mercedes rounded out the top ten, pipping an impressive run by United Autosports’ James Cole. A fully ballasted Andrew Jordan could only manage 12th in his Honda Civic – the model of car that took seven of the nine podiums on offer here last season.

Notable top ten absentees included the quintet of drivers from Motorbase Performance and Rob Austin Racing squads. Fabrizio Giovanardi and Mat Jackson could only muster enough speed for 16th and 22nd respectively in their Ford Focuses, whilst Rob Austin was outpaced by his Audi stable-mate Hunter Abbott further down the order.

Click here to see a full classification from FP1.