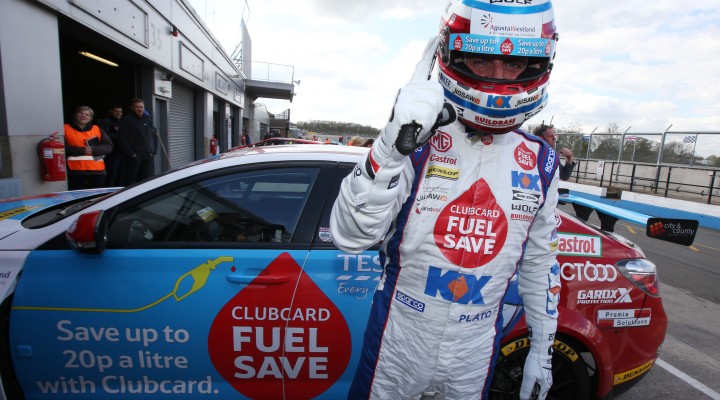 Jason Plato has obliterated the Donington Park lap record on his way to scoring his first pole position of the 2014 Dunlop MSA British Touring Car Championship.

The Leicestershire circuit had been a hive of activity and speed during free practice with lap times already dipping under Gordon Shedden’s pole position time from 2013. Many were predicting a record breaking qualifying session, and those predictions proved correct as Sam Tordoff first clocked a time in the 1m9s bracket before that was immediately bettered by his MG KX Clubcard Fuel Save team-mate Plato.

After starting on the front row in each of the last four seasons at Donington Park, Shedden’s liking for the circuit clearly hasn’t diminished as the Scotsman also jumped Tordoff to take second. Shedden’s front row start will be the first for the all-new Civic Tourer, however, and will also be the first for an ‘estate’ style car in the BTCC.

Tordoff, who is celebrating his 25th birthday today, will be slightly frustrated not to have matched his pace from free practice two, but third still represents a good opportunity for the Yorkshireman to target his first podium of the season.

Colin Turkington went about his business in the usual professional manner and although the eBay Motors BMW failed to trouble the fight for pole position, the Ulsterman produced a stellar effort to jump ahead of both VWs to take fourth. Aron Smith and Alain Menu will still line up an impressive fifth and sixth respectively, but such was the pace of the CCs during practice that the Chrome Edition Restart Racing drivers will be slightly disappointed not to have made either of the first two rows.

They did benefit from a rival’s misfortune, however, when WIX Racing’s Adam Morgan had all of his lap times removed from the classification after his Mercedes failed a mid-session ride height test. Morgan had seemed cemented in a fantastic fifth, and although he had time to correct the issue and return to the circuit, he went on to face further late heartache. The A-Class driver set a time good enough for 17th late on and with one final flyer remaining before the chequered flag fell he looked likely to rise further still, but he unfortunately lost control of his machine at Redgate and ran off the circuit.

Morgan’s loss was Andrew Jordan’s gain as the ballast-laden Honda Civic took an encouraging seventh and he will line-up alongside Jack Goff’s Vauxhall Insignia for tomorrow’s opening race.

Matt Neal – also running with significant weight due to his current second place in the drivers’ standings – took ninth, whilst Marc Hynes confirmed the pace of the MG6 by rounding out the top ten.

Jason Plato said: “It was a good lap and I’m really pleased with that. It wasn’t perfect as I made a little mistake, but we only lost half a tenth. We’ll take it as it comes tomorrow – Turkington is fourth in the quick starting BMW, but I won’t be letting him down the inside of me. He’ll have to go the long way round if he wants to get by and he’ll be a brave man to try that. One of the plus sides of our little issue at Brands Hatch is that we’re not carrying any weight here so I’m really happy with that.”

Gordon Shedden said: “It’s the first time the Tourer has been on the front row and I went half a second quicker than I did here last season. It still wasn’t quite enough but I tried my best so tomorrow we’ll try hard again and hopefully make some more history. We’re working on the car and it’s a real fine line – we’re giving it everything. It was a clean lap and I did a few laps of a similar time, which bodes well for tomorrow.”

Sam Tordoff said: “I was happy with my time in FP2 and then I set a solid banker on my first set of tyres in qualifying. I then pushed hard on the second set and I was a tenth and a half up just after the first corner but it had all gone by the time I’d got to the Old Hairpin – the track seemed to get slower as the session went on. I felt like I had a bit left in me but third is a good result – we’re on the inside for tomorrow and I think we’ll have a good day. The improvements we’ve made to the car over the winter are really starting to show and the car feels great.”

Click here for a classification of qualifying from Donington Park.