SHEDDEN SNATCHES WIN IN A LATE THRILLER AT DONINGTON 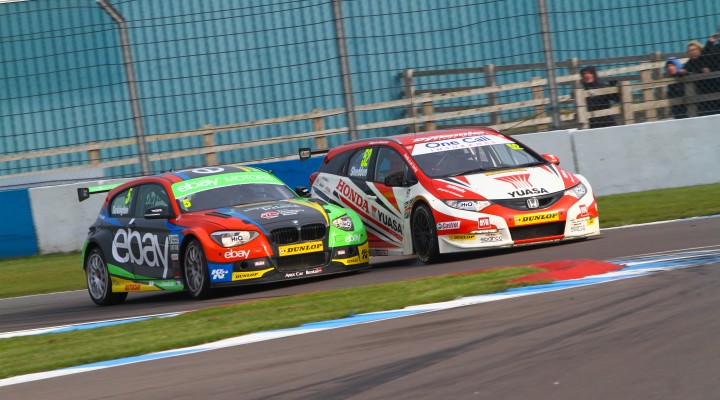 Gordon Shedden took a sensational victory in the final race of the weekend at Donington Park after passing the BMW of Colin Turkington at the final corner of the contest.

The Scotsman initially made steady progress from fourth on the grid as he slotted in behind Turkington and an eye catching battle between old adversaries Jason Plato and Matt Neal.

That tussle followed an early wild slide for Andrew Jordan’s Honda Civic, which sent him down the order and launched a chain of events as the chasing pack baulked up behind. The Chevrolet Cruze of Aiden Moffat went off and then clipped the MG of Marc Hynes on his return, which fired the latter into the barrier.

A brief safety car period followed with Plato diving past Neal at Redgate immediately after the restart, whilst Dave Newsham ended his day in the wars and out of the race after running off the road at the same corner.

Airwaves Racing’s Mat Jackson joined the Honda Civic Tourer party and the trio battled brilliantly through the Craner Curves. It seemed like positions would change at will but they eventually held station with some expert top level driving from all three at the Leicestershire circuit.

The MG of Sam Tordoff was rapidly fading on soft tyres and maximum success ballast, with the Mercedes of Adam Morgan and the recovering Jordan making light work of the race two winner. Reigning champion Jordan was flying by mid-distance as he blasted by Morgan before hauling himself towards the top five.

Plato was the next star to struggle with a heavy load, with Shedden, Neal and Jackson all getting by in quick succession. Jordan also made it through late on but he would get no further than fifth in the order.

With Turkington seemingly home and dry the Honda Yuasa Racing machine of Shedden started to reel in the BMW at a quite phenomenal rate. As the duo began the final lap they were nose-to-tail with Turkington in full defensive mode. They went side-by-side on a number of occasions in the first half of the tour before doing so again on the approach to the final chicane. Both were seemingly late on the brakes and the two machines ran off the circuit, with Shedden returning to the tarmac first and crossing the line to take the chequered flag.

It was an extraordinary climax to an outstanding day of racing at Donington Park, which now sees Jordan and Plato joint at the top of the standings with Shedden just a point further back.