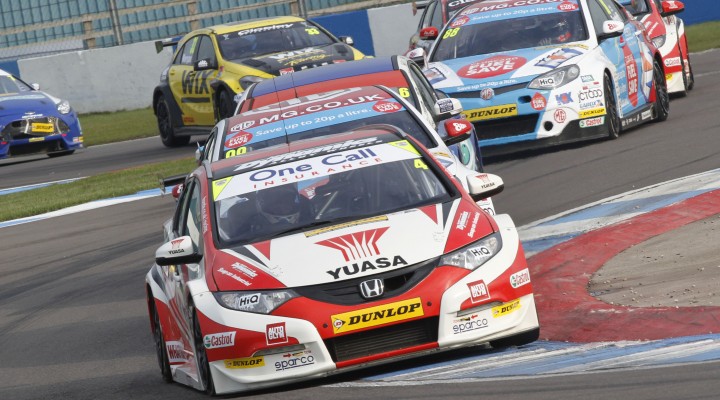 Following an impressive debut weekend at Brands Hatch for the manufacturer-backed Honda Civic Tourer, the MG6s of Sam Tordoff and Jason Plato hit back at Donington Park to close down Honda’s advantage to just four points after six rounds of the 2014 Dunlop MSA British Touring Car Championship.

Honda Yuasa Racing made the switch to the Touring having won the Manufacturer’s title for the last four consecutive seasons. Despite the fundamentals on the car being largely the same as the successful Civic hatchback, the team has encountered a number of idiosyncrasies in its new car that have taken time to get to grips with. As expected in the off-season, however, it didn’t take long for the team to get on race-winning pace. Gordon Shedden snatched victory in the final corner of the last race at Donington Park to put an ‘estate’ car on the top step of the podium for the first time in BTCC history, but despite Matt Neal also getting on the podium in the sister Honda, the pair couldn’t halt the march of the MGs in the opening two contests.

Setting an incredible pole position time of 1:09.460s – Plato went more than six tenths quicker than the previous qualifying lap record. With the MG KX Clubcard Fuel Save team with the package to beat in the dry on Saturday, Sunday’s wet weather brought the potential for a shake up at the front. The Triple Eight-run cars were well prepared for the challenge, however, and in race one it was an exhibition in formation flying with Tordoff hot on Plato’s heels all the way to the chequered flag.

Tordoff, who enters his second season behind the wheel of the MG, stole the march on his experienced team-mate to take the win in race two, but with Plato still having the pace to run at the front, it was another maximum score for the white and blue cars to bring them within striking distance of the Hondas. Things look set to be as close as ever next time out at Thruxton, for while it’s a circuit at which the Honda package is notoriously strong, Plato had been on for a race win in 2013 before a puncture denied him late on in race three.