Tordoff looking for wins at Thruxton 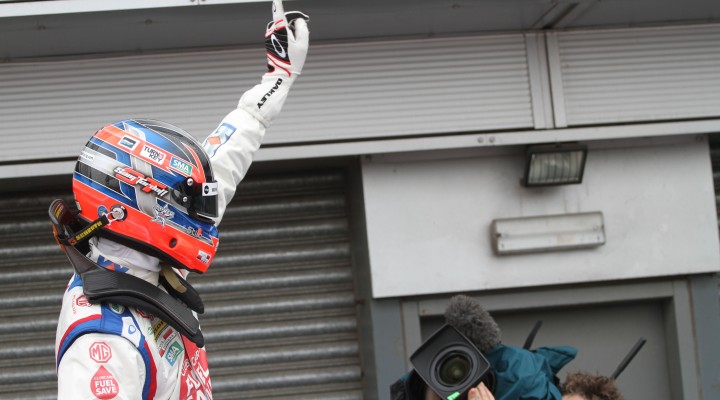 Following a quiet opening weekend for MG’s Sam Tordoff in the 2014 Dunlop MSA British Touring Car Championship at Brands Hatch, the second event at Donington Park was a welcome return to front-running form. The Leeds-based racer turned 25 years old on the Saturday at Donington, and the birthday spirit saw him lift his game to plant the MG KX Clubcard Fuel Save machine third on the hugely competitive grid.

A good start for Tordoff propelled him past the Honda Civic Tourer of Gordon Shedden off the line, and he soon passed the eBay Motors BMW of Colin Turkington for second. The Triple Eight-run cars have clearly sorted the issues they had in 2013 with damp conditions, as both Tordoff and Jason Plato drove away from the field with Plato taking the win as his team-mate hounded him all the way.

With the two MGs lined up on the front row for race two, a small error from Plato off the line allowed Tordoff around the outside at turn one and he never looked back, taking his second ever career victory in front of a huge bank holiday crowd.

Attentions now turn to Thruxton for Tordoff, who believes that another strong performance is on the cards this coming weekend. In 2013, MG’s manufacturer rival Honda secured all three victories around the fearsome Hampshire circuit – a record that both Tordoff and Plato are looking to re-write this year as they battle for honours at the top of the standings.

“Last year, we had good pace, but struggled with rear stability and as such were a little behind the Hondas,” said Tordoff. “This year I think the performance gap has closed, but there are other contenders in the mix too. It’s an abrasive, fast circuit so tyre wear will be a concern for everyone, but we have faith in our package and we just have to fine-tune it when we’re there. I don’t see any reason why we can’t be on the first couple of rows in qualifying and challenging for wins in the races.”

The #88 driver, who contested his first full season in the championship last year, now sits sixth overall having jumped two places on where he started his Donington weekend. The deficit to championship leaders Plato and Andrew Jordan is 30 points after six rounds, but with 24 rounds remaining Tordoff remains firmly in the title hunt.

Watch an exclusive interview with Sam at the end of our Donington Park Highlights video:

Three more intense touring car races are set to take place this bank holiday weekend, and you can watch all the action live and in high definition in ITV4 from 11:00am on Sunday 4 May.