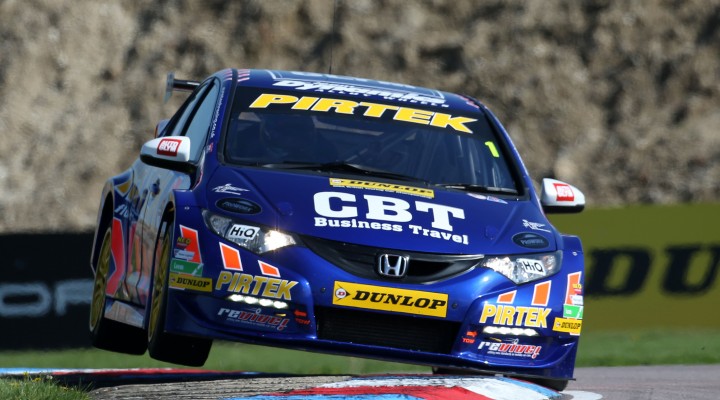 Frenchman Yvan Muller had previously set the fastest lap round the high speed 2.36 miles circuit way back in 2002, but reigning champion Jordan blitzed that benchmark after dominating proceedings throughout today’s running.

Despite his dominance in topping the time sheets in both free practice sessions, Jordan eventually only held a slender 0.172s advantage over Honda Yuasa Racing’s Matt Neal in qualifying. The triple champion’s Tourer team-mate Gordon Shedden was third, completing a 1-2-3 for Honda. With Hondas having won each of the last five races contested at Thruxton the Japanese marque is best placed to extend its run.

Jordan’s third Thruxton pole position in a row highlights his love for the circuit in qualifying, but incredibly the 24-year-old will be aiming to take his first race victory at the Hampshire speed bowl tomorrow.

“I was hanging on to it out there,” beamed Jordan. “I didn’t think it was the perfect lap but it was enough, which is great. It’s our third pole in a row here but I’m yet to win a race so it’d be good to finally convert one into a victory. Three solid results are even more important for the championship, however, so we’ll go through the data and make sure we’re set-up well for tomorrow.”

Special mention should go to Mat Jackson and Tom Ingram for securing fourth and fifth on the grid, with the latter taking the best starting berth of his short BTCC career so far.

“A great qualifying session,” said Ingram. “I didn’t make it easy for myself as I had a half-spin on my first run. We were playing catch up after that but I managed to get it together to go P5, which was quite a surprise to be honest. I’ve always liked the circuit but I was more nervous here this weekend than ever before as it’s my first Truxton event in the BTCC and front-wheel car. I’m delighted but now we need to turn a good qualifying session into results tomorrow.”

Jackson’s Airwaves Racing Ford Focus was in fine fettle from the outset and the Warwickshire driver set his fastest time early on in the 40-minute session. Team-mate Fabrizio Giovanardi found his ‘Blue Oval’ machine an altogether different challenge, however, as he saved the car from a wild slide late on and also had a high-speed spin at Noble. The Italian would still go on to set the 12th fastest time, cementing an encouraging day for the Motorbase-run outfit.

MG KX Clubcard Fuel Save’s driver duo Jason Plato and Sam Tordoff will line-up for sixth and seventh respectively for tomorrow’s opening race after a solid showing. Plato lost a tenth or so on his quickest lap after getting baulked up behind the Hondas, whilst Tordoff was content with his effort, believing that the MG6’s race pace will be more competitive than its one-lap credentials at Thruxton.

Collard’s eBay Motors team-mate Colin Turkington was a notable absentee from the top ten, eventually having to settle for 13th ahead of a brilliant effort from United Autosport’s James Cole. The team practically had to build an all-new car for Cole after his Toyota Avensis was destroyed in an accident at Donington Park last time out. Both he and the squad bounced back in style to score his best ever BTCC qualifying result.