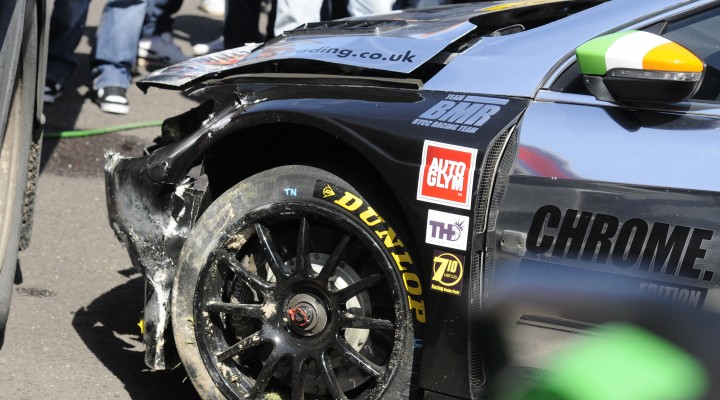 Chrome Edition Restart Racing are in a race against time to fix the VW CC of Aron Smith after the Irishman had an accident at Allard during free practice one.

Smith was down in the timesheets up to that point and with the set-up not completely to his liking, he lost control at the fast opening turn and ended up hitting the barrier heavily.

Damage was sustained to both the front and rear of the car after the VW initially went in bonnet first before tipping back around and into the tyre barrier. Problems at the rear are largely superficial but the sub-frame is broken and needs replacing, which will also require the Team BMR squad to fit a new engine.

The team are already hard at work but the car will definitely be absent from free practice two. They also face a difficult challenge to ready the machine for qualifying although Smith remains hopeful of the car’s return.

“Halfway through turn one the back started to come around and I couldn’t straighten it out unfortunately,” said Smith. “That was that – it was game over. I had a look at the car in a bit of a rage to be fair so I didn’t really analyse the damage too much initially. It is pretty second hand though so it’s going to be tough for the guys to get it back out there, but hopefully the guys can turn it around.”

Smith’s team-mate Alain Menu set the fourth fastest time in the session and the car itself is expected to be a front-runner this weekend after showing so well in the hands of Tom Onslow-Cole at the Hampshire circuit last season.