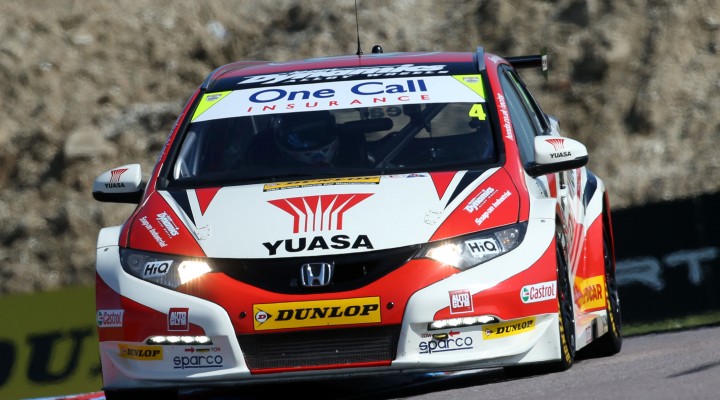 Despite bringing the all-new Civic Tourer to the high speed Hampshire circuit this time around the team is still hoping for bright things.

While a hat-trick of wins may prove a tall order the Tourer’s showing on Saturday suggests it’s right on the pace. Pirtek Racing’s Andrew Jordan was clearly the class of the field during practice and qualifying but the manufacturer Honda squad weren’t far behind.

“We’ve already done a couple of race distances and the pace has been pretty good so far,” said Team Manager Peter Crolla. “It’s a tricky place and if you get the set-up slightly wrong it can really hurt you but the guys are working hard and it’s going well. It will be interesting to see Jordan’s race pace but it looks like he has the jump on everyone at the moment – we’re not too far away though.

“Thruxton is a circuit where you need to feel comfortable in the car and you don’t want any surprises when you’re cooking nearly 160mph round the back. The weight distribution of the Tourer here is maybe a little less suitable than the hatchback but we still have a very good package. In Matt and Gordon we also have two of the best drivers in the business so I’m sure we’ll pull something out of the bag.”

After setting the second and third fastest times in qualifying Neal and Shedden are both confident in their contender, whilst hoping that their rival’s Civic Hatchback will be catchable in race trim.

“Pirtek are always quite aggressive with their set-up so if we can hang on to them we might be able to give them a good run in the second half of races,” said Matt, whilst Gordon concluded, “We’re both on the front two rows and we’ve completed important race runs today, which Andrew hasn’t, so he’ll be going into the unknown a little.”

Race one gets underway in just ten minutes and all the action is live and exclusive on ITV4.