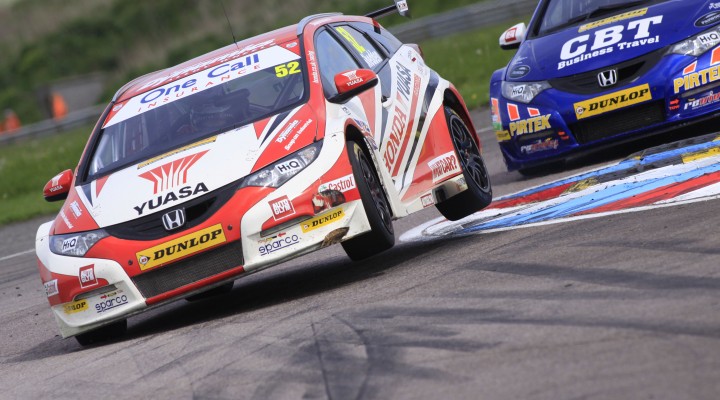 With the crowd still holding its breath after Shedden slipstreamed by the sliding Honda Civic of Jordan the race was unfortunately red flagged due to a huge accident at the daunting Church Corner involving the Audi A4 of Rob Austin and BMW of Nick Foster.

Shedden attacked for the lead from the outset but was lucky to stay in contention after running off at the Campbell/Cobb complex. His Honda Yuasa Racing team-mate Matt Neal politely let Shedden file back in order and immediately lost ground himself on the exit of the turn. Mat Jackson didn’t require an invitation as he slipped his Airwaves Racing Ford Focus past Neal.

It was the eBay Motors BMW of Rob Collard that took the challenge to Jordan in the immediate aftermath but Shedden hauled his Honda back towards the leading duo. Now running line astern Shedden eventually got by Collard coming out of Church and the top two began to pull clear.

Jordan’s hatchback looked decidedly looser than his Tourer rival and when the former slid wide through Church, Shedden got a run on the outside of Brooklands and made the move stick before they’d reached Club on lap 11. The battle certainly wasn’t over as Jordan stuck to the bumper of Shedden’s car but the race was run when the red flags waved.

“It was never meant to be a lunge at the start but I just missed my braking point,” said a happy and relieved Shedden. “I just took evasive action and thankfully everybody missed me. The car felt good late on and when Andy got one little slide at Church I got a great slipstream and was able to get through. Every time we get in the Tourer it just gets better and better!”

Collard took a lonely first podium of the season ahead of Neal, who eventually shuffled Jackson down to fifth. The move came when Jackson and Neal ran side-by-side through Goodwood with Colin Turkington’s BMW also looking to make inroads. Jackson lost out to Neal but was able to hold off Turkington down at Club to secure another top five finish for Airwaves Racing.

There was more joy for the team at the end of the race when tenth placed Fabrizio Giovanardi picked out number 10 in the reverse grid draw, meaning the Italian will start race three from pole position alongside the impressive Jack Goff.

Row two will be made up of Jason Plato’s MG and Adam Morgan’s Mercedes after the pair enjoyed a race long battle to finish seventh and eighth respectively in the second showdown.

Warren Scott retired his damaged Vauxhall Insignia after contact with Dan Welch’s Proton, whilst Chris Stockton also crashed out, but there was little doubting the most dramatic incident of the race. Austin attempted to force his Audi up the inside of Foster’s BMW at Church on lap 14 – the fastest corner in the country – and when the pair made contact they were fired towards the barrier at well over 100mph. Austin managed to recover relatively unscathed but Foster’s BMW went rear first into the tyre wall before his car careered over the barrier.

Foster escaped unharmed but it’s not yet known if his stricken BMW will be repaired in time for race three, which is due to get underway at 17:15.

Click here for the race two classification from Thruxton.