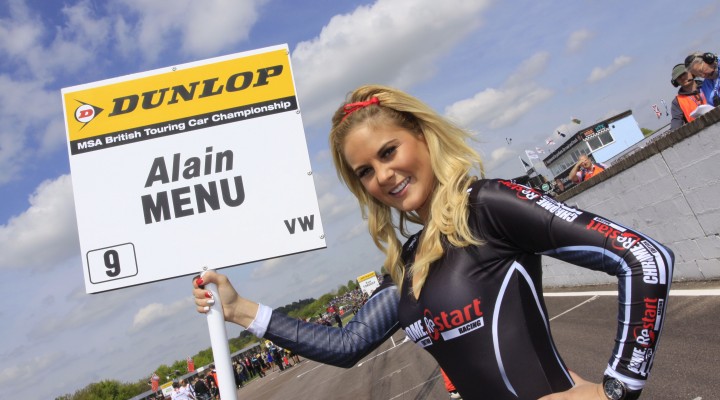 After Lea Wood won last year’s inaugural Jack Sears Trophy for scoring the most wins in S2000 machinery regulations for this season’s contest had to be changed as the BTCC entered its all-NGTC era. Now the JST will be awarded to the Independent driver who achieves the greatest improvement from their respective grid positions over the entire season, and so far it’s Menu making the headlines with a total of 52 passes.

“Thruxton is one of the best circuits in the UK and probably the world,” comments Menu. “It’s very fast and extremely challenging. You have to be really committed but to be committed you have to feel completely comfortable in your car.”

Alain went on to admit to not feeling completely at ease with his VW CC over the course of the weekend and he reevaluated his initial target of podiums on Sunday morning.

A solid race day looked on the cards, however, when he finished seventh in the opener. The double champion then received a drive through penalty for not lining his car in its correct position for race two. He fought back to finish 18th and then improved to 11th in the final showdown, making up important JST places in the process.

It was his Chrome Edition Restart Racing team-mate who enjoyed the best weekend of maneuvers, as Aron Smith made up 24 places at the UK’s fastest circuit. It was arguably not how the Irishman wanted to achieve such results, however, as a huge accident during practice forced him out of qualifying. Starting at the back of the grid meant Smith had a lot of work to do come Sunday afternoon and the former BTCC race winner didn’t disappoint with 22nd, 14th and 7th place finishes – making solid progress in each contest.

Smith is up to sixth overall in the JST standings but he’s still someway behind his stable-mate Menu. Rob Austin is in second, just one pass ahead of Rob Collard, who in turn is holding off the Ford Focus of Dave Newsham and BMW of Nick Foster.