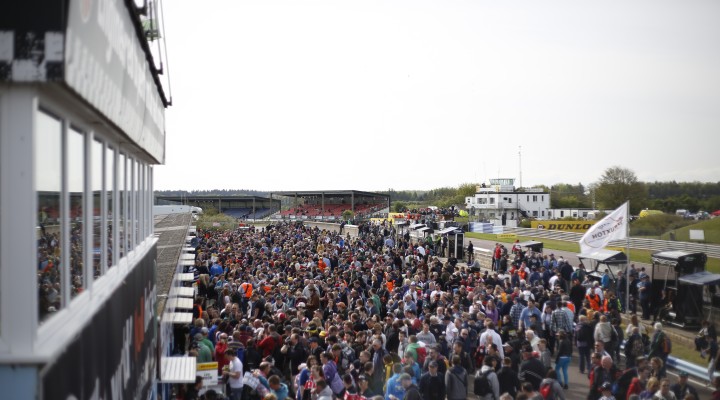 Dunlop MSA British Touring Car Championship fans flocked to Thruxton in their droves as the UK’s premier motor sport series stopped off at the Hampshire circuit last weekend (3/4 May) – bringing with it a record-breaking number of spectators.

Thruxton has always been a favourite amongst drivers for its demanding nature, and the three entertainment-fuelled races were enjoyed by a huge trackside audience that broke all records at the venue in the post-Super Touring era, with crowd figures the highest they have been since the turn of the Millennium. Millions more tuned in on ITV4, as the high-octane action was broadcast to households across the country.

Sam Brabham (JTR) popularly broke his duck in the Formula Ford Championship of Great Britain – and enjoyed it so much he repeated the feat the next day. The grandson of three-time Formula 1 World Champion Sir Jack Brabham was joined in the weekend winners’ circle by Radical Motorsport rival Juan Rosso.

The eagle-eyed would also have spotted a sizeable celebrity contingent in attendance, including Marussia F1 Team driver Max Chilton, commentating legend Murray Walker – affectionately known as ‘The Voice of F1’ – and former Indianapolis 500 winner and two-time Champ Car Champion Gil de Ferran, who was one of many to wax lyrical about Thruxton’s charms.

“I have many happy memories of this place,” said de Ferran, who was a guest of Honda Yuasa Racing. “I won at Thruxton twice in the British Formula Three Championship in 1992, and it really is the ultimate test of a driver’s skill and commitment – you can’t be half-hearted driving around here! It was good to see that the circuit hasn’t changed much since I competed here – and that it’s still generating spectacular racing more than 20 years on!”

Indeed, competitors and fans alike are unanimous in their appreciation for the challenge that Thruxton presents, and following a weekend of superb wheel-to-wheel action and wall-to-wall sunshine, Group Managing Director Bill Coombs admitted that he was delighted with the turnout.

“What a fantastic weekend!” he said. “The racing was absolutely first-class, right the way through from the BTCC to all the support series – and we even had good weather, which makes a change from recent weeks! It was wonderful to see so many people on the banks and in the grandstand – just like the old days!

“It doesn’t end there, though, as there is plenty more for motor sport fans to look forward to here over the coming weeks, beginning with the thunderous British Truck Racing Championship on 14/15 June, the high-profile British Superbike Championship on 2/3 August and the single-seater stars of tomorrow in British F3 on 16/17 August. Thruxton’s summer of racing is only just getting started!”