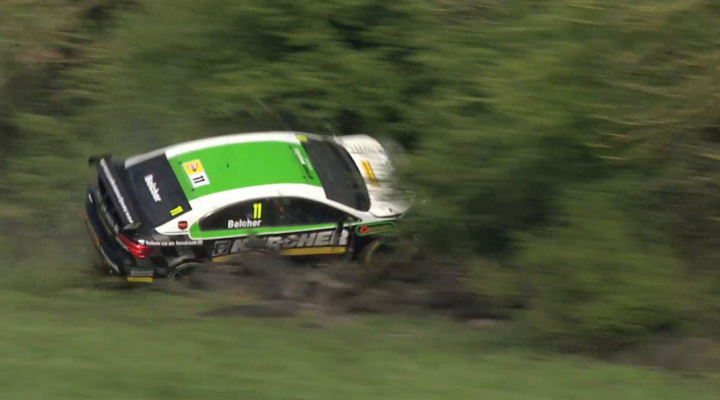 Simon Belcher would like to thank the BTCC fans for both their willingness to support the rebuild of his Handy Motorsport Toyota Avensis but also for the inspiration they’ve provided in the immediate aftermath of his high-speed accident at Thruxton.

The BTCC rookie endured a rather challenging weekend at the UK’s fastest circuit, culminating in his huge 120mph+ shunt at the daunting Church corner in race three. Thankfully Simon walked away without injury but his Avensis was heavily damaged, which has left him and the team assessing the costs ahead of Oulton Park.

“Firstly can I say that the support from the fans has been astounding,” he said. “Our budget to repair the car will be stretched hugely but the fans have already come up with ideas to sell t-shirts and others want to buy signed parts of the car.

“The shell is repairable although most of it actually needs replacing. The engine and gearbox also need to be rebuilt – it’d take me all day to list all of the parts that are broken, so we have a lot of work to do.”

Whilst admitting it’s not an experience he would like to repeat Belcher was keen to highlight the incredible safety of his NGTC machine.

“It was a failure on the car at probably the worst place in the entire country, in terms of the speed we were carrying,” continued Simon. “At Church you brake, turn in, and then get back on the throttle. A split second before it happened I had just got flat back on the throttle, hence the speed, and we hit the tyre wall at more than 120mph.

“It was a pretty spectacular shunt and I was very lucky to walk away. I am pleased Thruxton are going to look at the situation there although nobody wants to change the characteristics of the circuit.

“What is does show, however, is the sheer strength and safety of the NGTC cars. The fact that three drivers walked away from big accidents at the weekend is a big plus and a huge reassurance to the rest of the field too – we’ve done some more crash testing for them all! It’s the fastest accident I’ve ever had that’s for sure.”

Simon Belcher was trending worldwide on Twitter on Sunday evening following the accident and he’s since had a number of interviews with media around the globe. Whilst the reaction has all been aimed towards him, he quickly points out that any recovery will be down to his Handy Motorsport squad, Speedworks and the fans.

“My guys are already working on the car and have stripped it down. We have to thank Speedworks too as without their experience and expertise it wouldn’t be possible for us to even try making it out for Oulton.

“It’s the phenomenal fan power that has really blown my mind though. The fact that BTCC fans want to help is completely overwhelming. I’m not one of the front-runners nor have I even been in the series for that long, but the fans want to see everyone out there – it’s an inspiration and it really drives me on. Let’s face it – it was my big chance to make the prestigious end of season DVD! Seriously though, the response has been amazing and I’m really grateful to everyone.”

Far from disheartened by his weekend woes Belcher is keen to build on his BTCC experience so far, which he says has been everything and more than he had expected.

“I’m thoroughly enjoying it, which is why we’re desperate to get back out there for the rest of the season,” he concluded. “The plan was to learn at Brands Hatch and finish all the races, which we did, and then we wanted to push into the top 20 for Donington. Again we achieved that goal, but Thruxton seemed to just go from bad to worse. We had some issues with the car and I during the weekend and then it obviously ended in the worst possible way.

“I did get to follow Alain Menu during one race and he just pulled me along with him and we made a number of passes. I’ve always said you don’t learn from drivers that are worse than you and in the BTCC we just have so many quality drivers so I’m learning all the time.

“The fight just to get in the points is huge – it’s so competitive and making that top 15 is like a win for some of us. We just need to pick ourselves up now, take the positives from our first three events, and keep on improving.”

Click here to purchase a ‘I helped Simon out of the woods’ T-Shirt or visit www.handymotorsport.co.uk for more information.