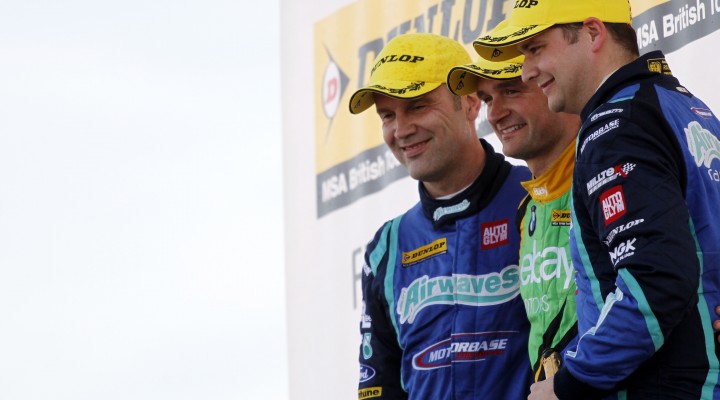 Many said that Thruxton hailed the return to top form for Airwaves Racing but those within the team will tell you that it has been on the pace since the start of the season. Mat Jackson and Fabrizio Giovanardi scored a double podium for the Kent-based squad last time out, but results up to that point hadn’t necessarily matched their performances.

Jackson was running in sixth place in the season opening race at Brands Hatch when the VW CC of Aron Smith tipped him into the gravel. The 19-time race winner was sent tumbling down the order and although he fought back to grab the final championship point it was a moment that hampered his podium chances for the weekend. He claimed seventh in the concluding contest to show some of the potential in the car but it was still a frustrating return overall.

Another seventh place at Donington Park was followed by a fourth in the final encounter in Leicestershire, and a podium result was getting ever closer.

The breakthrough came at Thruxton where Jackson was quick throughout, having taken fourth in qualifying and maintaining position in the first race. Another top five followed in race two before he passed his team-mate to claim second in a dramatic race three.

Jackson is one of the form drivers in the BTCC with only Andrew Jordan and Gordon Shedden bettering his results in the last five races.

“Everything started well with qualifying at Thruxton and the car was extremely strong from the word go,” said Jackson. “This is what it’s all about – the championship is the toughest touring car series in the world and it makes it even more sweeter when you make the podium.

“This whole year has been a good season really but we haven’t been able to show the results up to now. We’re looking forward to taking this on to Oulton Park.”

His Italian stallion stable-mate Giovanardi is still re-adapting to the rigors of the BTCC and also the new NGTC machinery, which is very different to the S2000 cars he drove in the series previously.

Top ten finishes at Brands and Donington represented a solid start to his campaign, but it was to be the final race at Thruxton that set the headlines. The double BTCC champion scored the first podium since his return having started on pole position in the reverse grid encounter. The BMW of Colin Turkington took the lead early on and Giovanardi also gave way to Jackson before holding off a gaggle of contenders to claim third.

“For Airwaves it was great to have two cars on the podium,” he said. “Of course we were looking for the win but sometimes you have to surrender. The BMW was fast and Jackson was also a little bit faster than me so in the end I said ‘okay let’s keep the podium’. I can tell you the last few laps were very hard as I had lots of cars behind me.

“I don’t feel completely comfortable in the car yet but Oulton Park will be another opportunity for me to search for it. It will be another fight and another challenge.”

The man responsible for bringing Giovanardi back to the Dunlop MSA British Touring Car Championship is Motorbase team boss David Bartrum, and the man himself is happy with the progress being made by his squad.

“It was a good result and Mat had been knocking on the door throughout, whilst Giovanardi did a brilliant job in the final race. They worked together to get that result so I’m very happy,” he commented.

“The pace has been in the car all year but it hadn’t quite happened up to that point. Fabrizio is still getting to grips with the car and you haven’t seen the best of him yet. He’s learning and it’s a total different formula now to what it was but he’ll get there. Mat has been driving well all season but it hadn’t quite gone his way until Thruxton.

“It’s a tougher nut to crack now. There are 31 cars and probably 15 that can win so it’s a harder job to get there. Anyone who makes the podium this year will have had to do an extremely good job.”

With the team having faced a number of highs and lows in the last two years all eyes will be on Airwaves Racing to see if the consistency continues into mid-season and beyond.