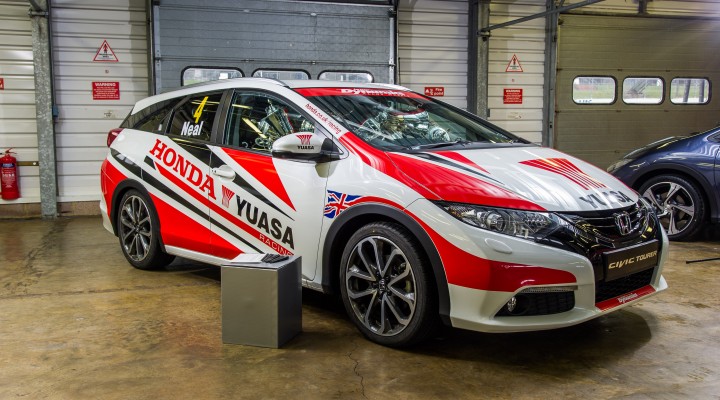 While the 2014 Dunlop MSA British Touring Car Championship has a few weeks off between Thruxton and the upcoming round at Oulton Park (7-8 June), Honda Yuasa Racing drivers Matt Neal and Gordon Shedden have been having some fun with their Civic Tourers.

The team has made history with its new model this year, as it became the first ‘estate’ style car to take a podium in the BTCC on debut at Brands Hatch back in March. Matt Neal brought his #4 Tourer home in third place in the very first race of the year, but it was to be his team-mate Shedden in the #52 machine to take the first ever win for the model.

A sensational performance in the final race of the day at Donington Park saw ‘Flash’ grab victory on the last corner of the last lap in one of the most scintillating battles of recent BTCC history. He then made a trip to the top step again at Thruxton, and is right in championship contention just eight points behind current standings leader Andrew Jordan.

To kill the time between BTCC meetings, the two Honda drivers decided to find out just how many of their trophies they could cram into a road-going version of their Civic Tourer racer… watch the video below to find out who was closest to the mark!

Click here to book your place at Oulton Park and see the Honda Civic Tourers go wheel-to-wheel with 29 other flame-spitting touring cars around the incredible International Circuit configuration.