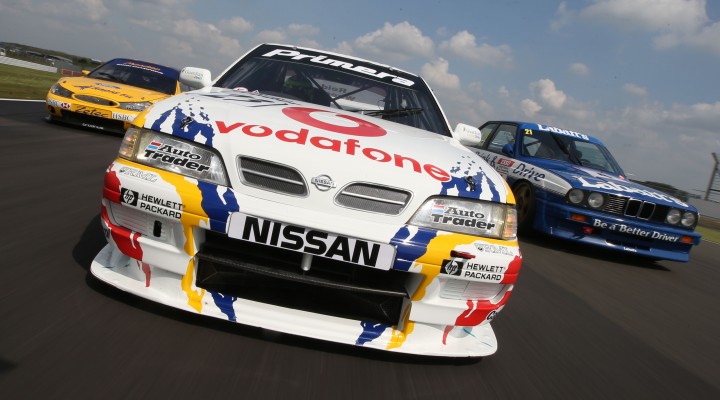 Touring car fans are in for a real treat at Oulton Park on the 7/8 June as they’ll witness five tin top contests from two outstanding eras of the BTCC, plus the usual host of Britain’s best support races.

The 2014 Dunlop MSA British Touring Car Championship has got off to a quite incredible start, with five different drivers reaching the top step of the podium and action aplenty throughout the field.

The current day crop in the BTCC are busy carving out their own piece of history with some 31 cars, represented by 11 of the world’s biggest car manufacturers, making the grid. In the nine races so far we’ve had amazing overtakes, last gasp victories, plus the thrills and spills you’d expect from the country’s premier racing series, as you can see in ITV Sport’s bite sized Thruxton closer below:

Adding to the excitement at Oulton will be the double-header of Super Touring Car Championship races where some 29 cars have been entered, including a Vauxhall Vectra by none other than double BTCC champion John Cleland and a Peugeot 406 by Patrick Watts.

Those two legends won a race apiece in the season opener at Thruxton, but with Super Tourers appearing on the TOCA package for the first time since their own heyday, both Cleland and Watts will be looking to repeat the trick in front of a huge crowd in Cheshire.

Cars revved up for the contest at the recent Silverstone Classic Media Day, which is where one of the five rounds of this now fully fledged series will take place. The Easter Revival at Thruxton kicked the championship off and now Oulton Park is set to host the second showdown. Brands Hatch and the Silverstone Classic in July are next up for the STCC before the season finale takes place back at Oulton Park for the Gold Cup meeting on 23-25 August.

As build up to the Oulton Park event reigning BTCC champion Andrew Jordan will be testing an ex-Jeff Allam Vauxhall Cavalier at the Cheshire circuit on Wednesday 4th July, which will be his first time in a 90s tin top machine – “I’m a Super Touring car virgin and I can’t wait to try it out,” enthused Andy.

The BTCC event at Oulton is notoriously one of the most popular on the calendar, renowned for massive crowds, intense racing and a carnival atmosphere on the series’ only visit to the north west. This year the drivers will return to the longer International layout, ironically last used during the Super Touring years.

As well as three races from the BTCC and two Super Touring Car Championship encounters, there will be support from the Ginetta GT Supercup, Renault Clio Cup, Formula Ford, and the young chargers of the Ginetta Junior Championship.

Tickets for the Dunlop MSA British Touring Car Championship at Oulton Park are available from £26, with free admission for children aged 12 and under. For more information call 0843 453 9000 or click here.