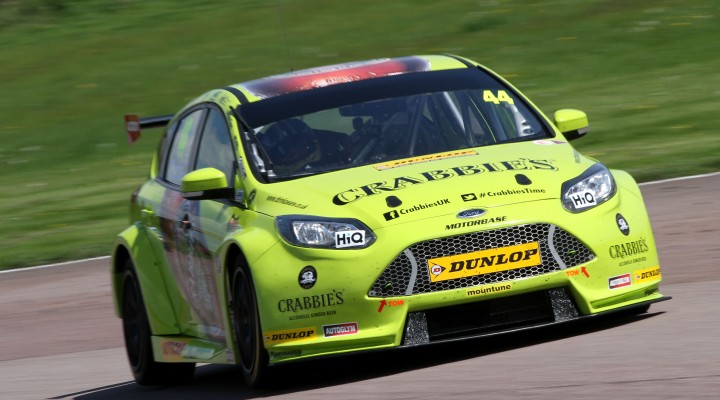 Crabbie’s Racing’s Jack Clarke is thoroughly enjoying his maiden season in the Dunlop MSA British Touring Car Championship, but the Surrey-based racer is keen to make real progress behind the wheel over the coming months.

Confirmed with the Motorbase Performance squad on the eve of the season, Clarke had time for just a few test days in his striking green Ford Focus before the cut and thrust of the season opener at Brands Hatch.

The 26-year-old narrowly finished outside the points on his BTCC debut but he immediately broke his duck next time out at Donington Park. His best qualifying of the season to date followed at Thruxton, where he also fought for championship points in the final race until contact with another competitor sent him tumbling down the order.

The official BTCC website caught up with Clarke as he prepares for the next round at Oulton Park. He looks back at his start to the season while giving his thoughts on the remainder of the campaign…

“The deal came about quite late in the day but that’s the way it goes sometimes. I had hoped to do more testing and feel better prepared, but then you always do, and the reality is never perfect. I’m working with a good bunch of guys – we’re learning all the time and I feel the future is really bright.

“We’re only three events in and there’s so much more to come so it’s all very encouraging. It’s a moving platform all the time and the frustrating thing in your first season is that you finish every event with so much more knowledge that you just wish you could start the weekend again!

“I’ve raced mainly on international circuits in recent years so I suppose I’m a bit rusty at some of the UK tracks – I hadn’t been to Thruxton since 2006 for example. My best lap times can sometimes be towards the end of a race, which sounds unusual when you think about the tyre wear, but that’s the natural learning curve that I’m on – simply getting better as each weekend progresses.

“My outright pace just isn’t quick enough yet to start predicting that I’ll be with the front-runners, but I have full belief in my ability and know that I’ll get there. Now we have to improve for Oulton Park and try and make a significant step – anything lower than 17th in qualifying will be disappointing as it just compromises your whole weekend.

“We’ve been in the points and I was running 16th at Thruxton before I got a nudge from someone else. I was flying at the time and the car felt perfect right at the end of the weekend, but obviously we need to find that feeling as soon as possible. It’s a blank canvas for me so it’s sensible that I learn from Mat [Jackson] and Fabrizio [Giovanardi], who are both helping me. I have good access to their data and I’m trying to filter in as much information from those guys as possible.

“Overall I have thoroughly enjoyed being a part of the championship. It’s so competitive, the media coverage is great and the passion shown by the fans is immense. I was one of those fans having watched touring cars for many years and there’s a real sense of community here – it’s just fantastic to receive so much support.”