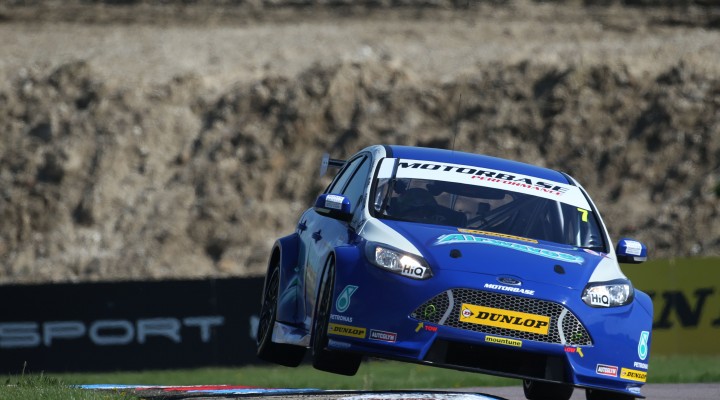 Following a five week break for the Dunlop MSA British Touring Car Championship, the Airwaves Racing squad heads to the stunning Oulton Park circuit in a buoyant mood after storming back onto the podium last time out at Hampshire’s Thruxton circuit over the May Day bank holiday weekend (3-4 May).

The Motorbase-run squad put in a strong performance with the Mountune-powered Ford Focus ST’s collecting five top ten finishes during Sunday’s three races, ending on a high note with a double podium from Mat Jackson and Fabrizio Giovanardi in the final race of the weekend.

The Airwaves Racing squad has put the break in the racing to good use, making further developments to the Focus and expectations are running high with the team’s sights firmly set on a return to the podium.

Oulton Park is notoriously one of the most popular events on the BTCC calendar for drivers and fans alike. With a massive crowd expected to descend on the scenic venue, the intense racing and exhilarating atmosphere is set to deliver a weekend of racing to remember as the BTCC takes to the revived International circuit – a layout which has been out of use since 1996.

The weekend’s racing action gets underway at Oulton Park June 7-8. Live coverage of Sunday’s events will be shown on ITV4, itv.com and also in HD from 11.15am, with itv.com/btcc featuring live streaming online of Saturdays qualifying session between 3.15 and 3.50pm.

Team Manager Oly Collins said:
“It’s good to be back racing again after the long break. The team has been very busy working hard on ever improving the car and we’re going to Oulton Park full of confidence after our strong performance at Thruxton. Hopefully we can pick up where we left off and hit the ground running.”

Airwaves Racing driver Fabrizio Giovanardi said:
“I want to try to win this weekend. We came close at Thruxton and we’re more confident for this weekend for sure. The results at Thruxton helped, it showed that we can deliver a good result. The team have been busy during the break, working hard on the car and we expect a bit more power at Oulton.”

“We’re in good shape. We’ve made some changes to the car off the back of Thruxton, and hopefully we can carry that form through into this weekend and get the results we want and need for the championship.”