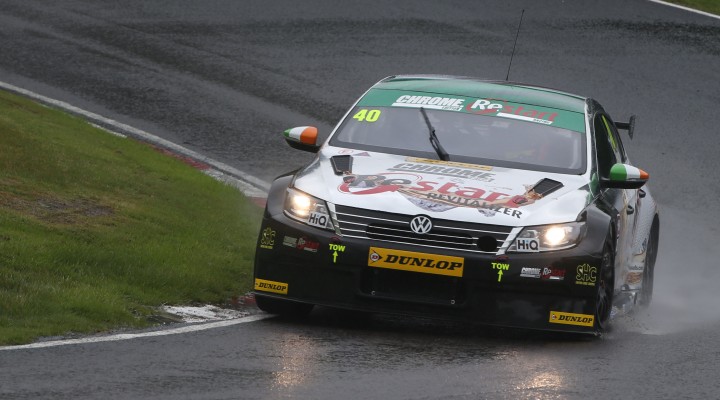 The Irishman put in a flawless performance as several others succumbed to the tricky conditions. Honda’s Gordon Shedden and MG’s Jason Plato, who have been inseparable on-track throughout the day, completed the podium positions.

Colin Turkington rounded off a sensational weekend by finishing fourth, following his pole position and double victory earlier in the proceedings, and the eBay Motors driver leaves the Cheshire circuit at the top of the standings.

A huge downpour ahead of the final race threw the teams a late curveball, although only United Autosport’s James Cole decided to race on slick Dunlop tyres in the drying conditions. With a significant amount of standing water on track the treaded option proved prudent, although slick-shod Cole scored a championship point for fastest lap on the last tour of the race.

The fight for victory got off to a frenetic start when first Tom Ingram and then Mat Jackson attacked Smith for the lead. Ingram’s challenge only lasted a few corners, however, as his Toyota Avensis ground to a halt with an electrical problem.

The tussle was briefly suspended when Hunter Abbott, Matt Neal and Jack Goff had a coming together on the opening lap and the safety car was called upon while marshals removed the stricken cars and debris from the circuit.

When battle resumed Jackson’s attack quickly ended when he lost control of his Airwaves Racing Ford Focus through Cascades, spinning away a chance to win his first race of the season. Incredibly a third challenger, Rob Collard, also missed his opportunity when the MG of Plato tapped him into a spin at Lodge.

Smith’s task didn’t get any easier, however, as he now had three former champions bearing down on him in the shape of Shedden, Plato and Turkington. Thankfully for Smith the title protagonists focused mainly on each other, as Turkington first passed Plato before the latter nipped back by after contact through Shell Oils Corner.

Despite the quartet remaining in close proximity until the chequered flag it was a delighted Smith that took his second ever BTCC victory and the first success for his Team BMR-run outfit.

Rob Austin fended off Sam Tordoff to take fifth, cementing his best day of the season so far with a trio of top five finishes including his maiden podium of 2014.

Alain Menu and Andrew Jordan continued their race two exploits by battling for position in the final showdown. Swiss racer Menu eventually came out of top after getting a run on Jordan’s Honda across the finish line before making the move stick into Old Hall.

The recovering Jackson finished ninth ahead of his Airwaves Racing team-mate Fabrizio Giovanardi, although the Englishman will surely regard the contest as a missed opportunity.

There was heartache for some other points chasing contenders too as Rob Holland’s Audi A3 broke down while the American was running in 12th and then 11th placed Lea Wood spun away his chances at Hislop’s. Martin Depper was another to narrowly miss out, racing his Pirtek Racing Honda Civic to the flag but finishing just four tenths of a second outside the points paying positions.
Click here to see the final classification.